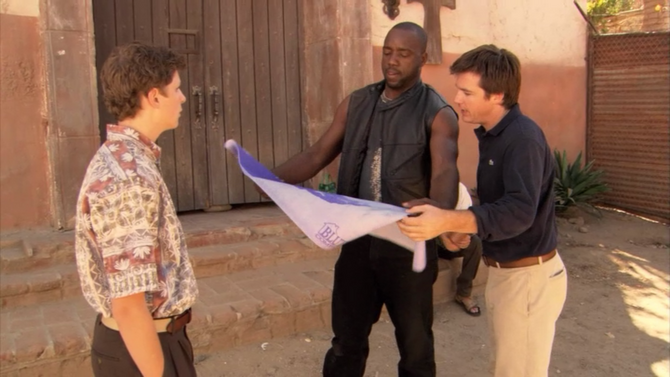 "¡Amigos!" is the third episode of Arrested Development's second season.

Michael is increasingly frustrated over being abandoned by the family, and when the staircar is found in Mexico, Michael vows to find his father and give him a piece of his mind. Also, Buster spends time with Lupe's family and thinks he's in Mexico.

The Hunt for George Sr.

Michael gives some fiscal reports to G.O.B. who is still acting as president to appease the stockholders. Michael jokes that G.O.B. doesn't have any friends, a comment that makes G.O.B. scoff. In his office - a supply closet - Michael is approached by Lucille who informs him that her private eye Gene Parmesan has found where George Sr. has been hiding. Gene surprises them in the room and tells them George Sr. is in Mexico. Michael decides to head down with his son to find him. G.O.B. jealously thinks Michael is trying to flee the failing company so he hires a bounty hunter named Ice to follow him.

On George Michael's request, Michael attempts to get to know Ann better as they drive to Mexico but ends up talking to Lindsay the whole way there. In Mexico they give up and hire Ice to track George Sr. instead. Michael drives the stair car home with Maeby while Lindsay and George Michael take George Sr.'s car, leaving Ann in Mexico. They race back once they realize their mistake. G.O.B. follows Michael to Mexico and tackles him about his "plans" to flee the company. Gene, who has been paid by Lucille to track G.O.B., tackles G.O.B. for fleeing the country. Ice then tackles Michael, who he believes to really know where George Sr. is. Michael pays Ice, G.O.B., and Gene to find George Sr. together and drives back to California with George Michael and Ann.

After spending three hours in the car with her, Michael doesn't hesitate to tell G.O.B. that he doesn't like Ann.

Lindsay and Tobias continue their "open relationship" experiment. Lindsay takes an interest in Ice and thinks he is following her as she assists Michael in his search for their father. When she finds out he's just a bounty hunter, she fools him into thinking she knows where his target it. He follows her back to the model house where he tackles Tobias, who is wearing Blue Man Group makeup. He finds out she is married and she finds out he has absolutely no interest in her.

Buster has been ordered by Army to go to Iraq and decides to go in protest of his mother's relationship with Oscar. Lucille throws a party to spite him but he decides to sneak in Michael 's trunk to Mexico. He gets out at Lupe's house, thinking it is Mexico. He is surprised that they own so many things he used to own but has no idea they were originally his possessions, given away by his mother. He adapts to "Mexican" life and goes to work with Lupe's brothers. They work at Balboa Towers and he ends up serving lunch to a horny Lucille and Oscar.

→ See more quotes from "¡Amigos!" at Transcript of ¡Amigos!.