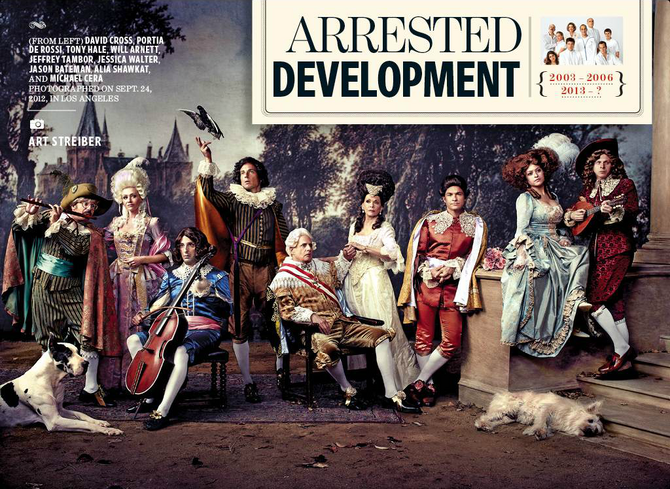 In October 2012 the cast of Arrested Development were apart of Entertainment Weekly's reunion issue. To celebrate their reunion in six years and they took part in a photoshoot to celebrate Season Four.

The Bluths are back (well, almost)! With the series returning for at least 10 new episodes that will debut on Netflix run this spring, the cast (who slipped into Renaissance-era costumes for their EW photo shoot) reveal what it was like to work together again. - Entertainment Weekly

"Lindsay is kind of the princess of the whole situation, so she obviously had the iconic sort of pink and purple, girly Marie-Antoinette getup."

"His character is an actor and takes himself way too seriously, but he’s just kind of an idiot. The cape is overly dramatic and the sash is kind of just ridiculous, as is the hat. I wanted his wrists to have big ruffles because his hands are up, he’s playing a flute."

"The only person whose outfit I changed from what I was planning in my head was Tony. I wanted [Jason Bateman] to wear the blue outfit because I thought it was the most iconic and [since] he’s the one who’s looking at the camera. But actually Tony was like, ‘My character is childlike and sort of a doofus. Do you have anything like a little boy blue kind of outfit?’ It actually made more sense [for Tony to wear the blue outfit] because he’s playing the cello and the one in the painting who’s playing the cello is wearing the blue outfit."

Retrieved from "https://arresteddevelopment.fandom.com/wiki/2012_Arrested_Development_EW_Reunion_Cover?oldid=54602"
Community content is available under CC-BY-SA unless otherwise noted.