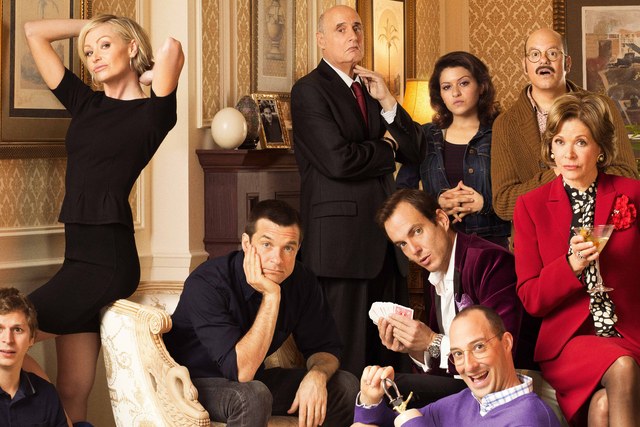 2013 Guardian The Bluth is Out Cover

On May 25, 2013 Jason Bateman, Will Arnett and Portia de Rossi were interviewed by The Guardian (UK) and returning to Arrested Development and what to expect from Season Four.

Seven years after its cancellation, Mitch Hurwitz's cult sitcom is being revived by Netflix. We meet its stars Jason Bateman, Will Arnett and Portia de Rossi. - The Guardian

Jason Bateman on Michael Bluth and the comdey of Arrested Development
Michael is just not in great shape, It's seven years since we last saw him and things are a lot worse. He's kind of joined the rest of his family in being a little bit desperate. He always kept things together, at least he thought he did, and so the edges have started fraying on him a little and he's trying to get back on his feet.

It's a very specific kind of comedy and probably because of that, I think it is so beloved [by fans] because you either love it or hate it. He's not trying to be too cute, too smart; hiding things for those who are really going to study us and revere us. He just thinks of these cool little things. It's very densely written, and if you like to pay attention deeply to a comedy, then this is rewarding. If you like to have a bit more of a predictable rhythm to the humour in a show then this show is not for you."

Portia de Rossi on Lindsay Bluth and the Release of Season Four
"This series really lent itself to a collaborative, creative experience, When Mitch told me the episodes would be released simultaneously and the action in them would take place simultaneously and that we'd all have an episode, my head was spinning. But now that we are days away from it airing, it seems completely commonplace. She's a 40-year-old woman who doesn't have a successful match, She has a very bad relationship with every member of her family. It might have been funny in her 20s, not any more."

Retrieved from "https://arresteddevelopment.fandom.com/wiki/2013_Guardian_The_Bluth_is_Out_Cover?oldid=54604"
Community content is available under CC-BY-SA unless otherwise noted.