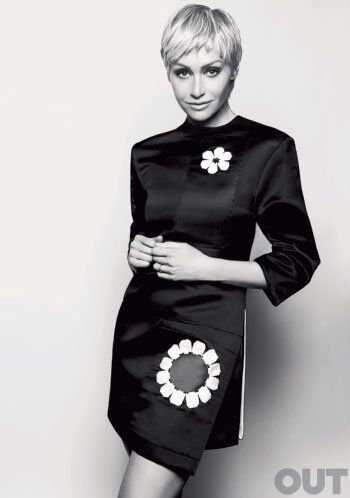 On May 24, 2013 Portia de Rossi was on the cover of Out Magazine she was also interviewed on returning to Arrested Development.

Portia de Rossi has always been a lot more than one-half of television’s most powerful gay couple -- and with a new season of the cult hit 'Arrested Development,' she’s back to prove it. - Out Magazine 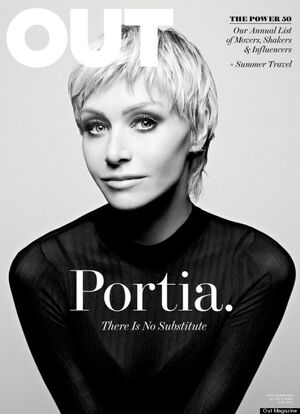 “It was a bit of a fantasy, because it’s on Netflix, we didn’t really feel the presence of a studio or a network. It felt like an independent feature, very creative and loose.” The process of Season 4: “We could trust the process because we know our characters and we know Mitch Hurwitz. But at the same time, everything was very spontaneous. Some of the funniest stuff I have ever seen in my whole life is in this new season.”

"Each character gets their own episode, and all the action happens at the same time, so it can only really work on Netflix, where these episodes are released on the same day. So, ... if you see Gob run by on his Segway, you can stop mine, click over into his, watch where he’s going. Some of the funniest stuff I have ever seen in my whole life is in this new season"

Sympathy for Lindsay (and on Tobias being gay) “In this reincarnation, she’s doing a little work on herself. She is attempting to... not become a better person exactly, but to find out who she is and what she wants. She isn’t as vapid and selfish as I’ve always thought her to be.”

“I remember David Cross asking Mitch, ‘Am I gay? Or is this just like this running joke?. I can’t imagine that he would ever think of himself as anything but this guy who is in an unfortunate marriage to a woman that doesn’t really love him. I don’t think that Tobias would ever think of himself as gay, and that’s what makes it funny. It is a huge credit to the writing and to David (that it’s not offensive).”

Retrieved from "https://arresteddevelopment.fandom.com/wiki/2013_Out_Magazine_Portia_de_Rossi_Cover?oldid=54598"
Community content is available under CC-BY-SA unless otherwise noted.