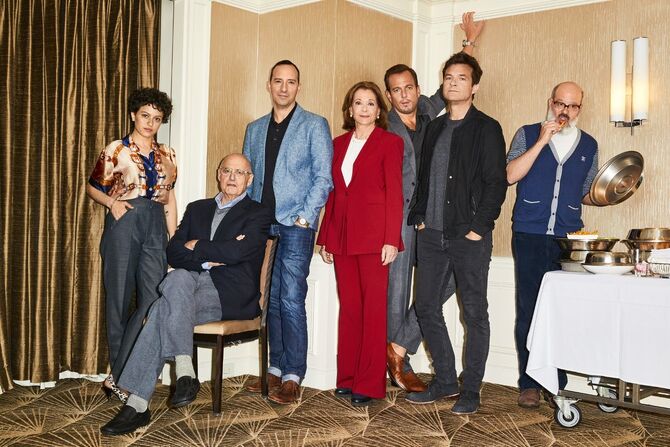 On Wednesday May 24, 2018 members of the Arrested Development cast gathered in New York for an exclusive and candid interview and photo shoot with the New York Times - to talk about Season Five and accusations against Jeffrey Tambor.

"In a freewheeling, at times emotional conversation that had the air of a family Thanksgiving dinner, the group candidly discussed Mr. Tambor’s behavior on set, reflecting in particular on the time he blew up at Ms. Walter, his onscreen wife. Ms. Walter spoke publicly for the first time about the incident, which Mr. Tambor first mentioned in an interview with The Hollywood Reporter." - New York Times

I’ve had so many bizarre interactions. Of course, you’re always happy to meet somebody who’s a fan of the show, and our fans tend to be particularly enthusiastic. And then you’ll be on the subway and someone will come up and go, “C’mon!” Very jarring. Or they’ll ask you to do the chicken dance at Penn Station. And you don’t want to because you’re at Penn Station.

Will Arnett on fan interactions

"It’s chemistry and also confidence. Because you see the others, and it just brings up your confidence level. Acting is not only what you send, but what you receive."

Jeffrey Tambor on going back to Arrested Development

I think Mitch had said he had to scale back on it a little. It’s too obvious now. And you know, it’s almost as if our family, just by themselves, are the Trumps. You’ve got the two dysfunctional sons. You’ve got Portia as Ivanka. George and Lucille. Although Melania, no, I don’t think we could compare Melania — Melania is the only one who is sort of likable.

Jessica Walter on jokes that were dropped for Season 5

"Let me just say one thing that I just realized in this conversation. I have to let go of being angry at him. He never crossed the line on our show, with any, you know, sexual whatever. Verbally, yes, he harassed me, but he did apologize. I have to let it go. [Turns to Tambor.] And I have to give you a chance to, you know, for us to be friends again."

"But it’s hard because honestly — Jason says this happens all the time. In like almost 60 years of working, I’ve never had anybody yell at me like that on a set. And it’s hard to deal with, but I’m over it now. I just let it go right here, for The New York Times."

The cast apologises to Jessica Walter

After the interview with The New York Times was posted online there was backlash towards the male cast of Arrested Development. While trying to defend Jeffrey Tambor, they seemed to belittle Jessica Walter's experience with him. A day after the interview Jason Bateman, Tony Hale and David Cross all apologised to Jessica Walter publicly and privately - you can see their apologies down below:

Retrieved from "https://arresteddevelopment.fandom.com/wiki/2018_New_York_Times_Interview?oldid=54629"
Community content is available under CC-BY-SA unless otherwise noted.