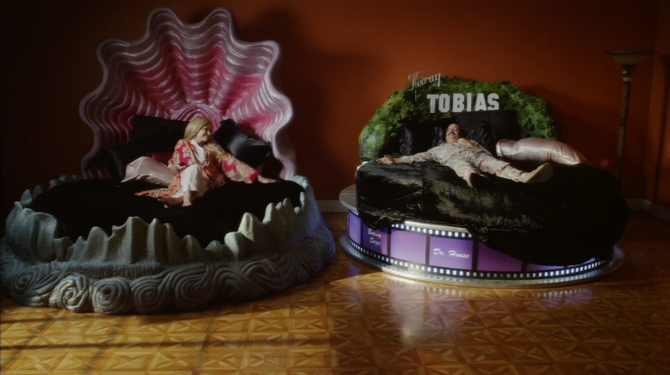 "A Couple-A New Starts" was the third episode of chronological re-cut of Arrested Development's fourth season. It premiered on Netflix on May 4, 2018.

Lindsay searches for answers far away from home, where a familiar face is also on a journey of discovery.

After the sinking of the Queen Mary, the family gathers at the coast guard's office and Lindsay begins to doubt whether she truly belongs to the Bluth family. After Lucille rejects her once more, she decides to finally divorce Tobias and distance herself from the Bluths. Tobias begins to feel similarly misunderstood by them.

Lindsay begins to look for a new path and, inspired by the book Eat, Pray, Love, she decides to travel to India. Unknowingly, Tobias also books a trip to India after finding the book discarded in the model home. Despite travelling to the same place in India, Lindsay and Tobias never meet each other. When they arrive, Lindsay's bus hits Tobias and he is taken to hospital while Lindsay continues onto her hotel.

In the hospital, Tobias is encouraged by one of the medical students to become a comedy actor. Meanwhile, Lindsay meets a shaman at her hotel who encourages her to live truthfully and return home to find the love she left. Lindsay's card is declined and her shaman appointment was cancelled, leaving Lindsay to wonder who she met. In order to get more money, she phones Lucille who promises money if Lindsay testifies at Lucille's upcoming trial.

Lindsay and Tobias return home on the same plane, still unaware of each other, and go to the family meeting at the penthouse. Due to their trips to India, Lindsay has decided to recommit to Tobias and Tobias has decided to recommit to his acting dreams. Michael announces he's leaving the family and founds his own company to finish building Sudden Valley although it struggles because there are no roads to it.

Meanwhile, Lindsay and Tobias decide to buy a house together and are convinced by real-estate agent James Carr to buy a mansion they can't pay for. Tobias also convinces James Carr to become his agent. Lindsay, Tobias, and Maeby move into the mansion while Lindsay continues rehearsing her testimony. Later, John Beard announces the collapse of the California housing market on the news.

On the next Arrested Development: Fateful Consequences... Michael lives in Sudden Valley as it becomes a ghost town.