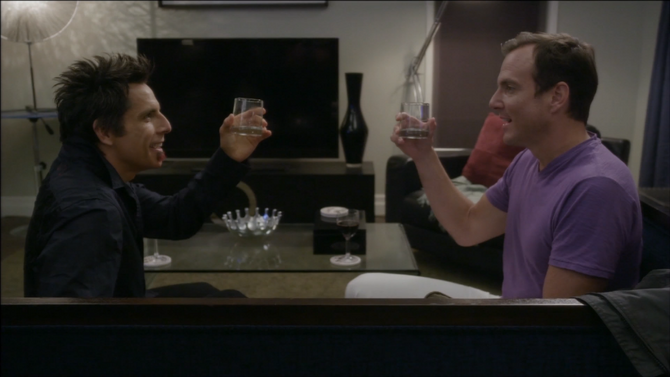 "A New Attitude" is the eleventh episode of Arrested Development's fourth season.

G.O.B. accepts a job from his brother but is distracted by a scheme of his own.

At the model home G.O.B. and Michael talk about G.O.B.'s foiled Jesus' crucifixion illusion and how G.O.B. thinks it was Tony Wonder. G.O.B. plans to retaliate and ruin Tony's "gay magic" career. Michael offers G.O.B. a job of selling Sudden Valley homes and also gets his film rights.

G.O.B. lures George Michael to the Gothic Castle on gay night under the pretense of wanting to share a message from his father. G.O.B. has his nephew unwittingly pose as his boyfriend in order to sneak into the stage so he can lock all trap doors and openings before Tony's show. The show begins and Tony pops out of a beanbag chair. Following the performance, G.O.B. and Tony talk and Tony reveals he uses a body double in a mask to perform the illusion. They enjoy each other's company and agree to see each other later.

At the model home, G.O.B. tells Tobias about his plan to get revenge on Tony Wonder, saying only that he is dating a celebrity. When he sells Tobias a Bluth home, Tobias tells him that other sex offenders need houses too, so G.O.B. fills all the Sudden Valley homes with registered sex offenders. G.O.B. receives a call from Lucille who wants him to help get construction started on the US/Mexico wall. Unable to talk any Mexicans into building the wall, G.O.B. goes to the border to put in some manual labor himself where he meets China Garden who offers to find a Chinese crew for him.

Meanwhile, Sally Sitwell shaves Tony Wonder's legs (meaning the two are seeing each other) and they talk about how they stole $10,000 from Lucille Austero's campaign to start Tony's gay magic career. Tony also explains how he wants to reveal G.O.B. as gay and destroy his Christian magic career. Tony calls G.O.B. and sets up a date at The Little Ballroom but G.O.B. goes to the similarly named children's playplace instead. Michael follows him there and they fight over Rebel. G.O.B. finally convinces Michael that he is not seeing Rebel and tells him about the sex offenders. Michael then visits Lucille and rips up her film contract.

G.O.B. goes to Tony's house who is mad that G.O.B. stood him up. They make amends and flirt and bond as they drink wine and eat popcorn. For the first time in their lives they feel feelings so they decide to take things slow and agree to have sex on the night of Cinco de Cuatro. At Cinco, G.O.B. runs into Ann who had a child with Tony Wonder. Upset that he's not gay, G.O.B. recruits Ann to have revenge sex. At the model home, G.O.B. tells her to wear the G.O.B. mask and have sex with Tony. The straight video (taken using the cameras set up by John Beard) would prove he's not gay and he would lose his career. Ann suggests that G.O.B. wear the Tony mask and she wear the G.O.B. mask, and G.O.B. agrees.

Ann heads downstairs and convinces Tony to have sex with her while wearing the G.O.B. mask to out G.O.B. as gay, ruining his career as the Christian magician. Tony heads upstairs and the two presumably have sex. Later Michael arrives and sees Tony so G.O.B. forces a forget-me-now down his throat. The next morning Michael calls Lucille Austero and attempts to seduce her to get an extension on the loan. He then calls Rebel who tells him she has company, which turns out to be George Michael.

In the chronological re-cut of season 4, footage from A New Attitude is used in 9 different episodes. The original cut of Season 4 is slightly longer than the re-cut version. Because of this, various lines of dialogue and sometimes even scenes are cut. These changes, as well as which scenes appear in which remixed episode, are listed below:

G.O.B.: What about you? I didn't hear from you for your entire childhood, and then thanks for the birthday card that I never got from you for the last 40 years.

G.O.B.: If you insist on speaking to me like you're my wife, then don't be surprised to find my [bleep] in you and then you never hear from me again!

Tony Wonder: A magician has many secrets, but there was one I was forced to keep... by society. "Don't talk to us," they said. "Keep your hands to yourself," they also said. Magic is only for straight men. I don't want to look at you, son. Just go to work. Why can't you be like your brother? There! Stay in there! We don't want you out here! Well, I'm here, I'm queer, and now I'm in a chair! Did somebody say Wonder?

Tobias: I have a list of men who can fill every opening you have!

G.O.B.: Yeah, damn it! I mean, I even helped fill his stupid homes with sex offenders, and yet he still hates me.

Narrator: The feeling was friendship, but neither of them had ever experienced it.

Ann Veal: I just thought that if you had to have sex with a man, wouldn't it be more of a turn-on to have sex with someone who looks like you? Okay.Put these on, and then meet me in the bedroom in five minutes for some serious secular intercourse.

G.O.B.: Bad example. If you were ashamed of being in love with a man, suddenly discovered these new feelings, something that you only allowed to happen because you thought he was gay and you were hoping to exact revenge, but then you found out he was straight, then you wanted to get even, so maybe you put a mask on someone and then tried to convince yourself that the sex you were about to have was with yourself, but it turned out to be him, and all you ended up doing was proving that your feelings were real then I might say something like, "Homo much?"