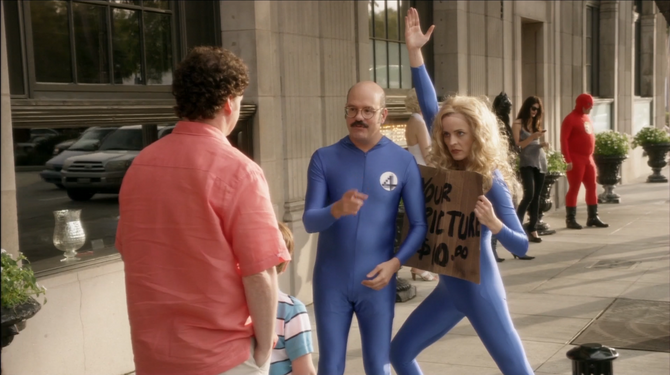 "A New Start" is the fifth episode of Arrested Development's fourth season.

Tobias searches for meaning after splitting with Lindsay, only to find that old habits die hard.

After his father-in-law was exonerated and mother-in-law was arrested, Tobias and Lindsay decided to take a brief break to discover their purposes in life. Tobias was also appalled by Lindsay's revelation that the entire Bluth family thought he was gay. At the model home Tobias happened across a copy of Eat, Pray, Love and ripped off the Eat and Pray sections and, like Lindsay, decided to take a spiritual trip to India with the mantra "A New Start". He even obtained an ANUSTART license plate. After spilling tea on his sarong in the airplane and retying it Tobias was hit by a bus. He spent two weeks in a hospital before flying back to the states. In the hospital he decided to become a comedy actor.

The Bluth family didn't care about his new career direction and still questioned his sexuality. He and Lindsay bought a mansion from James Carr who Tobias asked to be his acting agent. Tobias didn't find work for months and eventually talked Lindsay into visiting the Garden Grove Methadone Clinic where he met DeBrie Bardeaux who told him she was in the Fantastic Four movie. In the bathroom at C.W. Swappigan's she told him he reminded her of Billy Crystal (Meth, which Tobias didn't hear her say.) He decided to leave Lindsay for DeBrie. DeBrie's heart stopped so he rushed her to a hospital where a doctor told them she was riddled with "itises" and "oususes", but Tobias decided to stay with her to keep the dream alive.

The two wore Fantastic Four costumes to raise money and were arrested twice for copyright infringement. Finally entirely broke, Tobias visited Balboa Towers where he saw the apartment destroyed by Marky Bark's ostrich. He then heard Lucille Austero being attacked by an ostrich and he rushed her to the hospital. She offered hm $120,000 to work at Austerity with her brother Argyle Austero but he turned it down to keep his and DeBrie's dream alive. Upon telling DeBrie, she angrily left him and got into a limo with other party girls outside the Jeremy Piven Night Club.

Tobias returned to the model home to surprise Maeby but was caught by John Beard's reality show John Beard's To Entrap a Local Predator: Orange County Edition: Super Creep and arrested for being a sex offender.

In the chronological re-cut of season 4, footage from A New Start is used in 10 different episodes. The original cut of Season 4 is slightly longer than the re-cut version. Because of this, various lines of dialogue and sometimes even scenes are cut. These changes, as well as which scenes appear in which remixed episode, are listed below:

John Beard: And now the story of the awful people who are about to lose everything and the one newsman who had no choice but to entrap them all together. It's John Beard's To Entrap a Local Predator: Super Creep.

Dr. Tilive: How much butter?

Tobias: I don't know, a Star Trek chess set's worth?

Man: They're the ambiguously gay duo.

Tobias: I assure you there's nothing ambiguous about me. I'm Johnny Storm, the human flamer.

Tobias: Is there a little girl all here by herself? Daddy needs to get his rocks off.

John Beard: How old is she?

→ See more quotes from "A New Start" at Transcript of A New Start.

Retrieved from "https://arresteddevelopment.fandom.com/wiki/A_New_Start?oldid=54730"
Community content is available under CC-BY-SA unless otherwise noted.