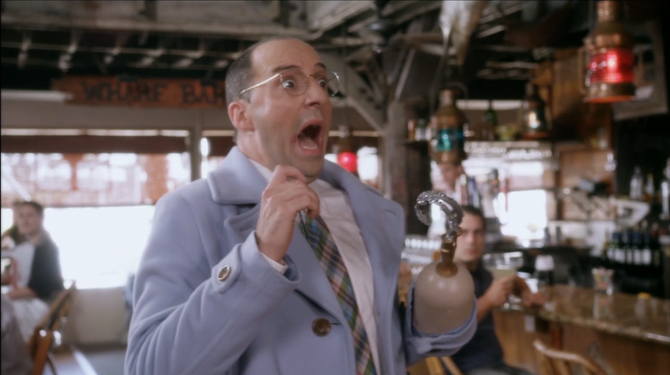 "A Trial Run" was the fifth episode of chronological re-cut of Arrested Development's fourth season. It premiered on Netflix on May 4, 2018.

When Lucille's maritime trial begins, her family is nowhere to be found. Lindsay and Tobias make new friends at a clinic they inadvertently attend.

Lucille's trial has begun although none of the family have turned up to testify or support her. Days earlier, Lindsay was struggling to prepare her testimony and Tobias suggests that they go to an acting class together, so she can sound more believable when she's on the stand. On the morning of the trial, they visit the Garden Grove Method One Clinic although Lindsay realises that it is actually a Methodone clinic and decides to talk to activist Marky Bark. Meanwhile, Tobias talks to former actress DeBrie Bardeaux about her role in a Fantastic Four movie. Although it was time to go to the trial, Lindsay and Tobias instead decide to go for lunch together with their new friends.

G.O.B. was also missing the trial because he was still in hospital after his magic trick went wrong at his wedding to Ann Veal. George Sr. bought the cave used in the wedding illusion and missed the trial while building up his sweat lodge business. Even Buster was late for the trial as, after an argument with Lucille, he spent the evening drinking juice with Lucille 2. By the time he reached the trial, it was already over and Lucille 2 testified instead which only condemned Lucille more due to the two Lucille's years of antagonism. Lucille doesn't want Buster to ever visit her in prison where she has been sentenced for 3-5 years.

Linsday and Tobias eat at C.W. Swappigan's where customers must trade objects to get food. DeBrie starts to eat butter and Tobias takes her to the bathroom to clean herself up. At the same time, Lindsday and Marky Bark discuss their beliefs and decide to run away together.

On the next Arrested Development: Fateful Consequences... Lindsay starts to live at Marky Bark's mother's ostrich farm while Buster moves back into Lucille 2's apartment.