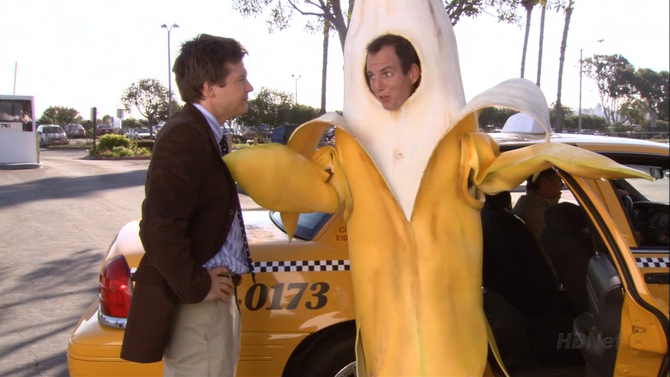 G.O.B. stages mass firings after being inadvertently roasted at the Bluth Company Christmas party. Plus, Michael is forced to rebuild the Banana Stand, and Buster plays hooky from the Army at an arcade game.

Michael Bluth finds the frozen banana stand vandalized by teenagers, a local holiday tradition, and heads home to find his son, George Michael, to engage in their tradition of rebuilding the stand. He finds his son too busy to help him with the stand or to attend the upcoming Bluth family Christmas party. Instead, George Michael plans to attend Ann's family Christmas party. Maeby has been told not to attend by her mother, Lindsay, who has big plans of finding a man at the party. G.O.B. is excited for the Bluth celebration, because he believes his co-workers are going to toast him, but he has been alienating the employees by boasting about his expensive suits.

Michael visits George Sr. in the attic, who warns Michael that George Michael is pulling away from him. There, they receive a call from a stressed Lucille, who George Sr. says must not be "getting any" from his brother, Oscar.

Michael visits his mother, finding her lonely with Buster gone to Army, Annyong sent to the Milford Academy, and Oscar having gone on his 420 mile walk along the coast (he's never made it past UC Irvine). However, Buster never made it to Army. When he changes the $100 bill Lucille gave him for the bus ride into a plethora of quarters, he becomes hooked playing with the nearby Skill Crane machine.

Michael begins rebuilding the stand alone and is soon joined by his niece. The two decide they should start spending more time together, as Maeby feels abandoned by her mother and Michael ignored by his son. The two make plans to attend the Christmas party together.

They arrive at the party to find G.O.B. nervous about having kids at the party, because their sticky little fingers might touch his $2600 pants. Michael says that he's just there to have fun, and G.O.B. cautions they shouldn't have too much fun, because he's just given an explicit sexual harassment speech to his employees, threatening anyone who flirts with his sister.

Lucille arrives, again in need of companionship after Buster has given her the false impression that Army is going well, showing her the fruits of his labors (stuffed animals he won playing the crane game). Michael decides to send Tobias over to Lucille's to give her some company, only he just blue himself in case the Blue Man group needs him.

As Michael and Maeby entertain themselves by sticking candy to the back of G.O.B.'s suit, Lindsay finds the party less enjoyable. Because of her brother's harsh warning to the employees, no one will flirt with her. George Michael shows up after a creepy experience with Ann's religious family. As George Michael and Lindsay watch Michael and Maeby perform karaoke together on stage, they feel abandoned, and both leave the party. They are not around to discover (as Michael and Maeby did), that the song "Afternoon Delight" isn't as innocent as the melody suggests. Michael cuts the song short and exits the stage, heading for G.O.B., who is eager to hear an employee roast him. He calls up a worker, Tom, but G.O.B. doesn't like what he hears. When he finds the entire staff is laughing at him, he fires them all.

Michael and G.O.B. decide to throw a new party and to return to their old way of doing things (Michael handling the business and G.O.B. being the fun party guy). Meanwhile, Tobias' visit to Lucille's did not go well, as she became afraid at the sight of a man covered in blue paint and blew an air horn into his ear.

Michael retrieves Oscar and asks him to give her some "Afternoon Delight" to relieve her stress. Oscar mistakenly believes that Michael is referring to a particular kind of marijuana ("Afternoone Deelite") and tells Michael that he'll put it in her brownie.

Lindsay and George Michael, meanwhile, decide they should be spending more time together, and opt to go to the second Bluth party together. The party begins at the docks by the banana stand, and G.O.B. shows up in the family's banana suit, looking to make his employees laugh.

Lindsay and George Michael decide to perform karaoke, but discover that "Afternoon Delight" is an adult-themed song. Lucille, under the effects of Oscar's "Afternoon Deelite", plows her car through the party and toward the banana stand, running over Tobias, who has been deafened by the air horn blow. She crashes into the banana stand, trapping G.O.B. inside.

Buster, who is nearby playing the skill crane, decides to be a hero. He spots a real crane on the docks and takes control, grabbing G.O.B. out of the crushed banana stand. As he's lifted up out of the stand, G.O.B. hears the sweet sound of laughter from the employees. Buster hadn't learned the art of lowering gently, and G.O.B. is abruptly released and plummets into the ocean.

Michael again takes to rebuilding the banana stand, happy to find that this time his son is by his side. Michael apologizes, acknowledging that George Michael has a right to spend time with Ann. The two reconstruct the stand while singing "Afternoon Delight" before realizing that, despite its catchiness, it's not the most appropriate song to sing.