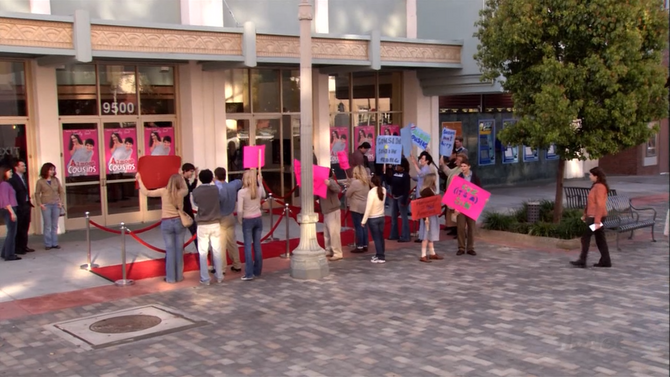 Almost Cousins is the English-language remake of Les Cousins Dangereux, produced by Maeby Fünke and Mort Meyers at Tantamount Studios.

While the original film received great critical praise (one quote on the poster calls it "a 'relative' masterpiece of complex eroticism"), the remake proved to not be as inspired, trying to circumvent controversy by explaining that the lead actors might not be cousins. This action caused the film to lose much of the complex eroticism of the original and was cut down to a length of only 52 minutes. It did, however, receive some commercial success when religious groups protesting the film's themes inadvertently drew curious viewers into theaters. ("Righteous Brothers")

A poster for Almost Cousins is seen at Tantamount Studios. ("Mr. F")

George Michael recognizes Rebel Alley because she was in this movie. ("It Gets Better")

Retrieved from "https://arresteddevelopment.fandom.com/wiki/Almost_Cousins?oldid=41614"
Community content is available under CC-BY-SA unless otherwise noted.