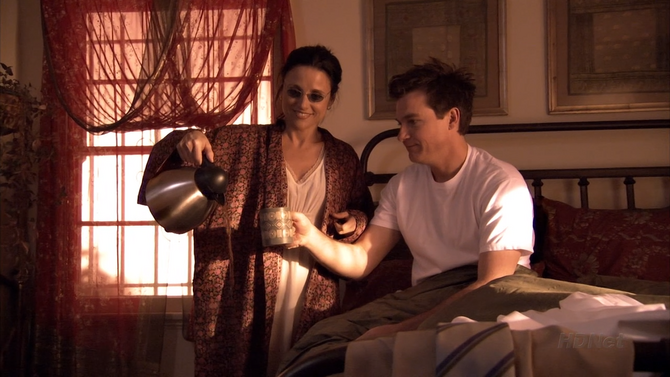 Michael attempts to have a one-night stand with an attorney whom he doesn't know is not only blind, but the prosecutor who is trying to put his father in jail. Also, G.O.B. gets married on a dare, Maeby pretends to be a girl with a made up disease, and George Sr.'s admirer turns out to be an undercover SEC agent who has truly fallen for him.

The Bluth family meets inside the courthouse with Barry Zuckerkorn to discuss a plea bargain that has been delivered from the prosecution. George enters, turning down the plea, claiming he knows for a fact he can win in court. (Cindi Lightballoon, an FBI mole sent to seduce George has actually fallen in love with him and told him she knows he can win—for a fact.) Michael is hesitant and decides to read the plea—something Barry didn't do due to his dating life.

At a local bar, G.O.B. teases Michael for not having a personal life and urges him to have a one night stand. Michael gets distracted from reading the plea by Maggie Lizer, an attorney. They flirt and he gives her the false name "Chareth Cutestory". The two have several drinks and leave together. The next morning, Michael connects the dots and realizes he has just slept with a blind woman. Feeling bad, he agrees to see her again. They walk around the park and he tries to read the plea but makes no progress.

George tries to lure the "fact" of his innocence out of Cindi but is instead caught by Lucille who assumes he is having an affair. Both women storm off but Cindi later returns while he works for Stefan Gentles on a chain gang and he discovers that Cindi's "fact" was just her faith—poor guidance she gained from watching Caged Wisdom. At court Michael finds out Maggie is the prosecutor leading the trial against his father. Barry asks for an extension to read the plea, and Barry and G.O.B. urge Michael to abuse his relationship with Maggie to get information about the trial. At Maggie's house, she asks "Chareth" to read some notes from the Bluth case to her."

After urging Michael to live life and have a one night stand, G.O.B. attempts himself to do the same. Instead he meets a marine biologist and the two spend the evening in a series of escalating dares and end up marrying each other. Before consummating the marriage she runs off to sell sick seals to a third world country. G.O.B. continues to brag that they had sex, even though they did not. He tries to get Barry's help with an annulment.

Lindsay receives a note that Maeby will have to repeat the ninth grade if her grades don't approve. She and Tobias as George Michael to tutor their daughter. He attempts to do so but she just gives him $120 cash to do the work for her. The next day at school, George Michael realizes Maeby is posing as a sick girl named Surely Fünke to receive donations.

Add a photo to this gallery
Retrieved from "https://arresteddevelopment.fandom.com/wiki/Altar_Egos?oldid=54809"
Community content is available under CC-BY-SA unless otherwise noted.