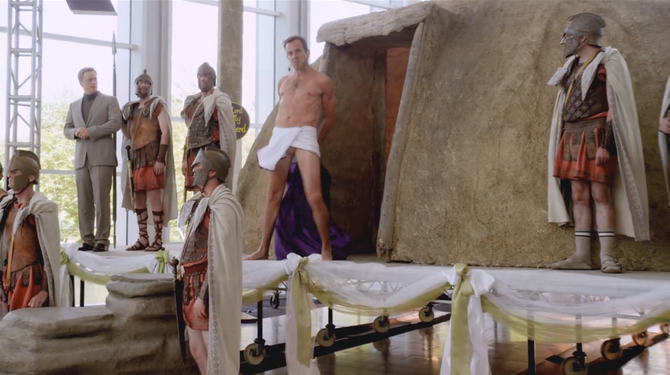 At his wedding ceremony to Ann Veal, G.O.B. performed his Jesus crucifixion illusion.

Trying to carve out a place in the magic world, G.O.B. starts his Christian magic act up (previously he performed the burning bush illusion in Iraq). At his wedding ceremony to Ann Veal he hangs himself on a giant glittery gold cross at the Church of Holy Eternal Rapture and tells the audience that Jesus' resurrection was an illusion. He then was handcuffed in from of his tomb. When a curtain came up, he snuck into the tomb and tried to access a key but the secret panel wouldn't open. He then fell into the trap door but couldn't break his fall so he passed out. He remained in the trick staircase which was taken to a storage unit in which he lived for several weeks.

Two weeks later the tomb was opened and a mannequin was found inside with a note that blamed his disappearance on the rapture and a reminder for the audience to Love Each Other.

In Mexico he found his tomb that was sold to George by Ann. He found the secret panel was wedged shut with a "t" cross necklace. ("Colony Collapse")