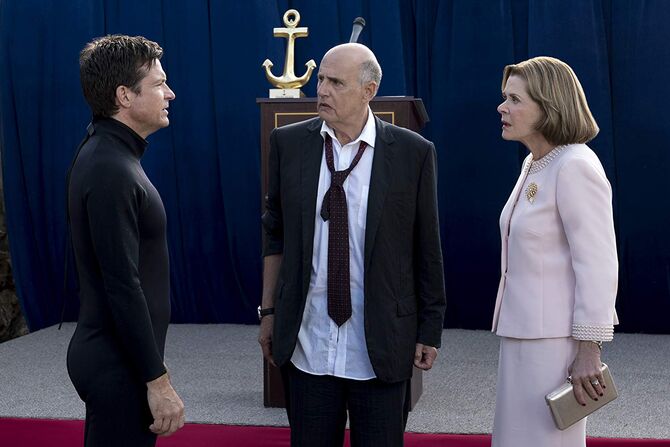 "An Old Start" is the fourth episode of Arrested Development's fifth season.

G.O.B. acquires a new office for the company with a "premium view". Michael gets a shock when he returns to a place that holds a lot of memories.

Michael goes to the Bluth Company to find Lucille Austero. Instead, he finds that the whole 3rd floor has been cleared out. He goes to leave but runs into G.O.B. and his new girlfriend in the elevator. He asks G.O.B. what happened with the company and finds out that they've moved to the 4th floor. G.O.B. only moved the company so that he could have his own office. G.O.B. wants to make his father proud. Michael says that maybe sons aren't meant to be close to their fathers. Maybe they need to disappear for a while and let them figure it out on their own. Michael goes home to pick up his scuba gear but finds Tobias in George Michael's old room. He's dressed as George Michael and when asked why he responds that he's just trying to find his place in the Bluth family.

Michael leaves and heads to the dock where he practices using his gear and the camera that he's gonna use to map the floor. George Michael goes to visit Maeby who is living in a senior citizen home. Maeby gets a visitor from one of Lucille's friends who ends up staying with her. George Michael doesn't know what to do about how he lied to Michael and said he was still seeing Rebel Alley. Michael swims to a beach that he hasn't been to in 30 years: the house where his wife died. He goes up and knocks on the door and Lucille answers. He discovers that the family never sold the family cottage. Michael asks if she ever wondered if he'd come out here and check and Lucille says no. Tobias is there and he's dressed as Buster. Michael asks Lucille if she has Buster. Lucille says no. Michael opens a bedroom door looking for Buster but finds G.O.B. He's spray painting an anchor. G.O.B. tells Michael that he went to a trophy store and purchased it so that he could give George Senior a whole store full of trophies. Michael tells him that he's not going to be there when G.O.B gives it to him. Michael asks G.O.B where Buster is and G.O.B mistakenly says that he knows where he is thinking that Michael is referring to his new girlfriend. Michael heads home to see George Michael after Tobias tells him that he was at the model home.

Instead of finding George Michael, he finds George Snr. George Snr tells Michael that he and Lucille aren't together. He tells Michael that Lucille is being courted. She's being courted by a guy named Dusty, who used to be part of the Newport Bay Boys, a beach gang that used to throw rocks at people who came on their beach. Michael says that it's probably nothing. George says that maybe it's his fault because he can't deliver the goods. Michael tells George Snr. about Rebel and the predicament, he's in to make him feel better. He tells his father that he has to talk to Rebel and make sure she understands that he doesn't want to see her anymore before George Michael finds out what he really said. He leaves George Snr. to continue to cry in George Michael's old bedroom.

Retrieved from "https://arresteddevelopment.fandom.com/wiki/An_Old_Start?oldid=54713"
Community content is available under CC-BY-SA unless otherwise noted.