And As It Is Such, So Also As Such Is It Unto You 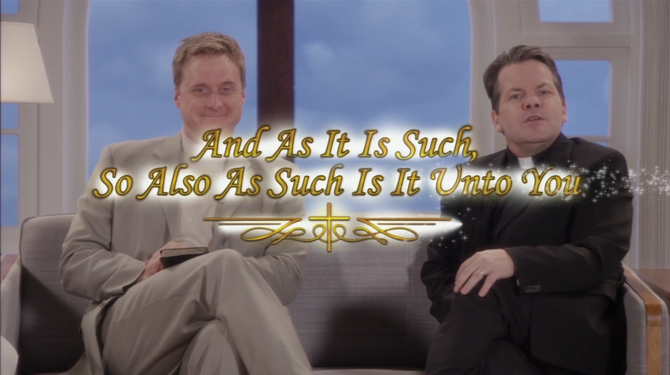 And As It Is Such, So Also As Such Is
It Unto You is a TV Show presented by Terry Veal and Father Marsala
Appearances: "Colony Collapse", "A New Attitude", "Unexpected Company", "Taste Makers"

And As It Is Such, So Also As Such Is It Unto You is a Miracle Network television program starring Pastor Terry Veal and Father Marsala. It features religious discussions between the two hosts and guests.

G.O.B. and Ann announce their marriage to the world on And As It Is Such and G.O.B. takes the opportunity to announce that the wedding and his Amazing Jesus illusion will take place on a live broadcast of the show. ("Colony Collapse")

On the morning of Cinco de Mayo (after being force fed a Forget-Me-Now (pill) by G.O.B. on the night of Cinco de Cuatro) Michael woke up to And As It Is Such with Father Marsala talking about 700,000 (abortions per year), the same amount of money he owed Lucille Austero. ("A New Attitude")

Gob announces on And As It Is Such that he's going into Christian gay conversion therapy. ("Unexpected Company")