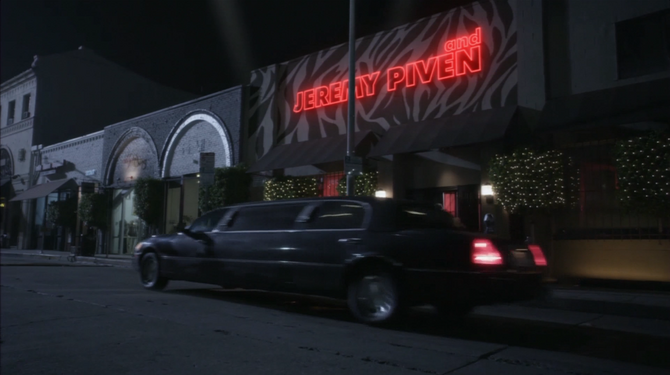 The club is a reference to the opening titles of TV series Entourage which credited the cast by displaying their names in neon signage on different buildings ending with "and Jeremy Piven". Entourage is parodied in "Colony Collapse".

G.O.B. meets his son Steve Holt at and but doesn't recognize it is him. When he finally does, Steve offers him a job at his Steve Holt! Pest Control company. Proud of his son and happy for his life's new turn G.O.B. stays and flirts using magic which attracts the attention of John Beard Jr. who asks him to entertain his friend Mark Cherry. G.O.B. entertains them and Rebel Alley with illusions until the paparazzi show up. G.O.B. sprays lighter fluid in the photographer's eyes and helps them escape, getting the nickname "Getaway". ("Colony Collapse")

Months later, trying to gain favor with the posse G.O.B. picks up a group of women including DeBrie from and. ("A New Start") ("Colony Collapse")

Retrieved from "https://arresteddevelopment.fandom.com/wiki/And_Jeremy_Piven?oldid=39655"
Community content is available under CC-BY-SA unless otherwise noted.