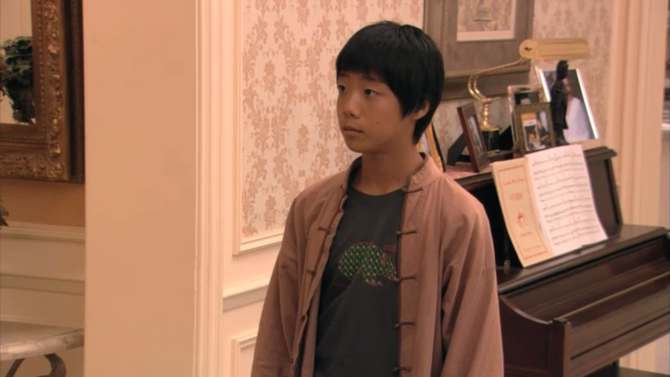 Annyong: Annyong.
From "Shock and Aww"

Hel-loh "Annyong" Bluth is the adopted Korean son of Lucille and George Bluth via the Korean Consulate of Child Services.

Annyong is portrayed by Justin Lee and appeared in 12 episodes of Arrested Development over all four seasons.

Lucille and George were thinking of adopting a child from the Korean Consulate of Child Services to make themselves look more charitable. During an argument with Buster over cottage cheese, Lucille angrily signed and submitted the forms. Months later Hel-loh arrived. Knowing no English, the youth always greeted his adoptive family by saying "annyeong," the Korean word for "hello." When they repeated the word, so did he. This caused Lucille to assume that her new son's name was "Annyong." ("Shock and Aww")

For a long while, Annyong did not speak English and only said "annyong", causing a great deal of frustration with members of the Bluth family. With time, he became an articulate member of the household who often found himself in disagreement with his new brother, Buster. Lucille eventually tired of Annyong and sent him to the Milford School.

After being forgotten by the Bluth family, Annyong returned and revealed himself to be a mole inside the family. Not for the SEC, but for his own family. Several years ago George had insulted Annyong's family by stealing their frozen banana business model and forcing him out of operation. ("Development Arrested")

Producers of Arrested Development foreshadowed this back to "¡Amigos!" when Annyong is seen wearing a mole T-shirt under his traditional Korean jacket. Annyong wears this shirt again in "Development Arrested". When the Banana Stand is destroyed in "Afternoon Delight" the graffiti reads "[I'll] get u Bluth — Hello." In "Mr. F" there are a great many conversations about moles (both spies and the creatures) and Annyong is seen for the first time in 20 episodes on a HAM radio, inside the walls of Balboa Towers.

After Annyong arrived, Lucille was going to send him back but his presence made Buster jealous, so she kept him. He was enrolled at George Michael and Maeby's high school. ("Shock and Aww") Annyong got a job at the banana stand and made George Michael feel self-conscious about his father. ("Staff Infection")

At the courthouse, Annyong teased Buster that when George was released from prison Buster would be kicked out of his parents' apartment. ("Justice Is Blind") Lucille starting using him as a purse because his traditional Korean outfit had many pockets but realized that it wasn't a good system while attending a Spring Break magic show by G.O.B.. She also set up a trust fund in Annyong's name with her mother's inheritance money. However, Lupe discovered that Annyong was actually 18 years old and therefore able to control the money if he so desired. ("Missing Kitty")

With the sole intention of making Buster angry, Lucille began to favor Annyong. She gave him juice boxes but refused to let Buster have any because it "would make [him] more awful." Annyong refused to share with Buster. ("Best Man for the Gob")

Annyong began taking soccer lessons which infuriated Buster to the point of snapping and running onto the field to ruin the game. ("Not Without My Daughter") Annyong developed a crush on Maeby after she kissed him to make George Michael jealous. ("Let 'Em Eat Cake")

Annyong revealed that someone stole his Uncle Sam wig, and the family realized it must have been George. ("The One Where Michael Leaves") Lucille gave Annyong money to "go see a Star War" to get him out of her hair. ("¡Amigos!") He was sent to the Milford School by Lucille, who was attempting to teach him a lesson (but about what she later forgot). ("Afternoon Delight")

Annyong later was found out to be hiding in the walls of Lucille's penthouse apartment. ("Mr. F") In the third season finale it was revealed that Hel-loh (who finally reveals his name after his usual greeting of "Annyong", prompting ironic confusion among the Bluths) orchestrated the second SEC raid on the family as revenge for himself and his grandfather. ("Development Arrested")

In a minor appearance, Annyong tries to stick it to the Bluths by using the Balboa Club membership, but is made responsible for the large bill and is deported. (4x8 — "Red Hairing")

While interned at Orange County Correctional Facility L.I.T.E., Lucille Bluth is seen wearing her prisoner identification number, "07734," which reads as the word "hello" when viewed upside-down. ("Double Crossers")("Queen B.")

"Hel-loh" is, according to himself, the Korean word for "One day," a name given to him by his grandfather, whose idea for a frozen banana cart was stolen by Lucille Bluth and used as inspiration for the banana stand that launched the Bluth empire; his grandfather vowed to one day get even for his stolen banana stand and ensuing deportation.

"Hel-loh" means a single day in the Korean language. The pronunciation of the Korean word in the English language can be twisted slightly to sound like "hello."