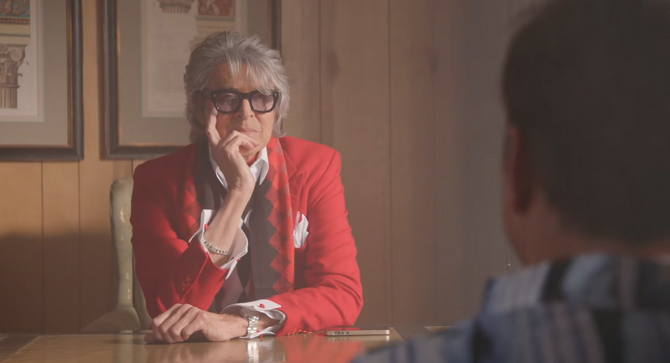 Argyle meets Gob when he goes to Quick Hard Cement to meet the Gay Mafia. Argyle Austero is threatening to tap dance on somebody's grave. Argyle tells Gob that they know he is really straight, that he only came out as gay for his parade trick. They also saw his TV announcement that he is going into Christian conversion therapy, and they are angry at him. Argyle wants Gob to go to the therapy but then announce that it didn't work. He says Gob has to stay gay for seven years, then they'll let him "age out." Argyle says this is more generous than what they did to Tony Wonder for pretending to be gay. Gob tries to tell Argyle that Buster probably didn't kill Lucille Austero. Argyle says he fought all the time with his sister, so he's not worried about her.

Retrieved from "https://arresteddevelopment.fandom.com/wiki/Argyle_Austero?oldid=54101"
Community content is available under CC-BY-SA unless otherwise noted.