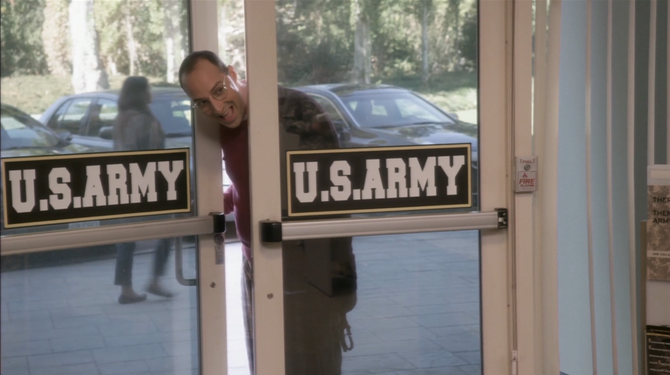 Buster Bluth joins Army for a period of time to show his mother that he is a man. He is signed up for Army by Lucille Bluth  after being approached by a Michael Moore impersonator.

When approached by a Michael Moore impersonator, Lucille Bluth stated that she would sign her son Buster up for the armed forces. ("The One Where Michael Leaves") Buster hoped he would not pass the medical exam due to his numerous physiological issues but army was in such dire needs for applicants he was accepted. ("The One Where They Build a House") After catching his mother in bed with Oscar decided that he would really enlist to teach her a lesson. ("¡Amigos!") Not having started training yet, Buster asked G.O.B. to borrow a Hot Cops army costume for George Bluth's birthday party (which was actually George's wake.) ("Good Grief")

Buster struggled to get over a wall at training and Sergeant Wendell Baker couldn't insult him due to a recent lawsuit from James Alan Spangler and Wayne Jarvis. Buster enlisted G.O.B.'s help and was able to climb the wall with the help of some verbal humiliation. ("Sad Sack")

While waiting for a bus to go to training, Buster made change for a $100 bill and spent all his money on a claw machine at the arcade. He lied to his mother and claimed that the stuffed animals were his awards: Army gives seals for marksmanship and gorillas for sand racing. He also told her that he was off to join "Hero Squad". ("Afternoon Delight")

Afraid of what might happen to Buster if he were deployed to Iraq, Lucille visited her old flame General Anderson whom she met as a USO singer during the Vietnam war. She had him pull Buster out of Army and into the USO. General Anderson later changed his mind when he felt Buster's shoulder massage. ("Switch Hitter")

While waiting for the bus to take him to active duty, Buster decides to swim in the ocean as a last act of defiance against his mother. His left hand is bitten off by a loose seal that had recently acquired the taste for mammal blood. ("Out on a Limb") He was then relieved from serving, due to his injury. ("Hand to God")

Buster tries to enlist George Michael in army so he could be relieved from his duty. ("Notapusy") He later uses his Army and Arabic skills to get G.O.B. out of an Iraqi prison. ("Exit Strategy") 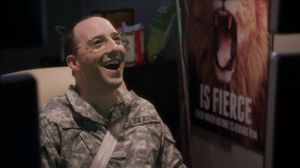 When Buster was at the pawn shop, he saw an Army sign which made him think he could impress her by joining Army. Buster was immediately accepted back into Army and was given control of a drone ship. Not knowing it was real and actually killing people, Buster played for 72 hours and had a lot of fun. After accidentally destroying a hospital in Spain Buster panicked when he found out he was killing real people. ("Off the Hook")

Retrieved from "https://arresteddevelopment.fandom.com/wiki/Army?oldid=40890"
Community content is available under CC-BY-SA unless otherwise noted.