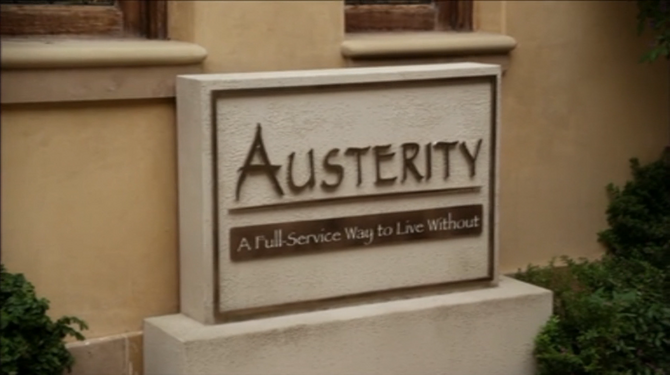 Austerity is a rehab clinic owned by Lucille Austero

Austerity is a rehab clinic owned by Lucille Austero and Argyle Austero. Argyle is the director of the clinic.

Austerity moto: "A full-Service way to live without"

After Tobias rescues Lucille 2 from an ostrich, she offers him a job at Austerity with a $120,000 salary. He turns it down. ("A New Start")

Tobias accepts later in order to get out of prison. At Austerity he leads a group session with Emmett Richter and Mark Cherry. When he sees DeBrie Bardeaux is also in his group, Argyle refuses to let him be her therapist so Tobias stages a Fantastic 4: An Action Musical at the clinic to be near her. Lucille Bluth has recently been admitted to the clinic and joins the rehearsals, mainly to insult DeBrie. At Cinco de Cuatro Lucille 2 finds DeBrie in a pile of debris and threatens to fire Tobias the following Monday. ("Smashed")

Lucille is admitted to Austerity to get out of her dangerous luxury prison. She joins the cast of the Fantastic 4 musical as the villain. ("Queen B.")