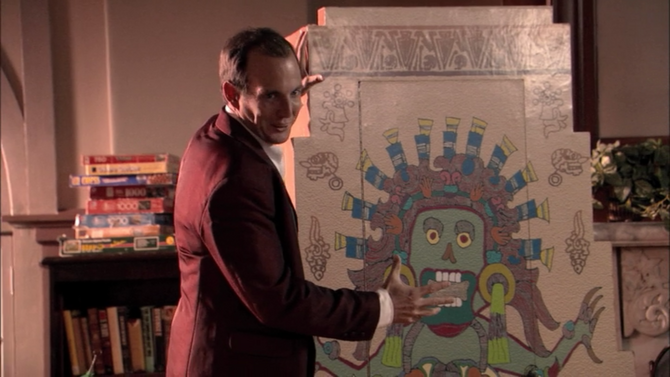 The Aztec Tomb is a magic illusion that was purchased by The Bluth Company for G.O.B.'s magic career. It cost nearly $18,000.

During George Sr.'s retirement party, G.O.B. hid his father in the tomb to hide him from the S.E.C.. He hid behind the revolving door in the tomb, which kept him out of sight until the police dogs found him. This was broadcast on the FOX 6 news by Trisha Thoon, and G.O.B. was subsequently kicked out of The Alliance of Magicians which he started. ("Pilot")

The tomb continued to be part of G.O.B.'s blacklisted magic career, and was used in his retirement home charity show. G.O.B. hid Earl Milford in the tomb and Earl used the chance to escape the nursing home. ("Public Relations")

The Aztec Tomb was stored in the model home's attic, where George Bluth successfully hid on multiple occasions, while on the lam. ("Good Grief") He once hid from Tobias and missed out on an opportunity to find cutoffs. ("Sad Sack") He once hid in the tomb to avoid Maeby who began using the attic as a private place to read scripts. ("Queen for a Day") George hides in the Tomb while George Michael and Maeby are looking for old records to burn. ("Motherboy XXX") He hides in the Tomb when Lindsay hide garbage in the attic. ("The Immaculate Election") He also hides when G.O.B. comes to retrieve Franklin from the attic, but he reveals himself because he needs G.O.B. to help him reclaim Lucille. ("Meat the Veals")

Even when he wasn't hiding inside the tomb, it was visible in the background in many episodes including "Afternoon Delight", "Ready, Aim, Marry Me", "Sword of Destiny", and "Righteous Brothers".