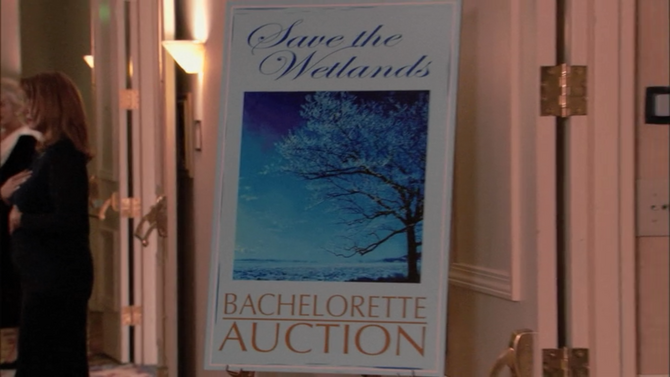 The Bluth family's country club holds annual bachelorette auctions to raise money for various causes. In 2003, it was the Save the Wetlands Bachelorette Auction. In 2004, it was to reseed the golf course greens. Lucille and Lindsay often attend and are auctioned, though married, in order to keep up appearances.

Lindsay, who spent a miserable afternoon in the actual wetlands, was a complete mess and no one was bidding on her. Michael, proud of her effort, bid $1,000 to save her from embarrassment. Lucille gave Buster $10,000 to bid on her but he accidentally bid on Lucille Austero. ("Charity Drive")

At the 2004 auction, the proceeds were going to reseed the country club's golf course greens. A tranquilized Lindsay was going for only $10 and Tobias asked Michael to "borrow" some cash and excitedly blew all $5,000 on her. Michael then had to trade Stan Sitwell his newly acquired Corvette to bid on Sally Sitwell for $15,000. Lucille Austero was once again up for auction and was bid on by Stan Sitwell for up to $800 until G.O.B. used the $10,000 his mother gave him to bid on her. The auctioneer commented with surprise on how high the bidding was from non-members. Tobias, Michael, and G.O.B. spent a total of $30,000 at the auction. ("Burning Love")

Add a photo to this gallery
Retrieved from "https://arresteddevelopment.fandom.com/wiki/Bachelorette_auctions?oldid=40023"
Community content is available under CC-BY-SA unless otherwise noted.