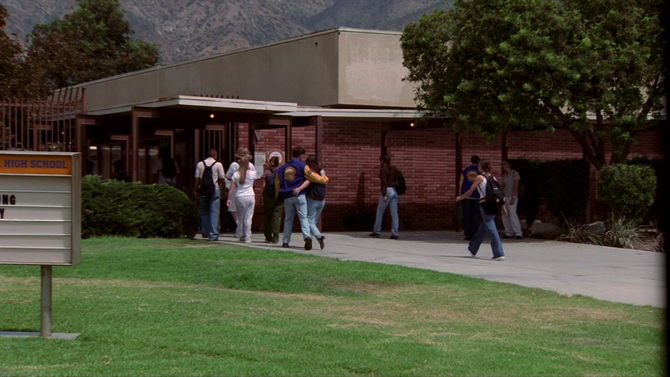 G.O.B., Michael and Lindsay studied at Balboa High School as teenagers while Buster studied at the Milford School. ("Shock and Aww") In high school, Lindsay and Roger Danish were voted "Best Hair" while Michael and Ming Hsu were voted "Most Likely to Succeed". ("Top Banana") G.O.B. beat Michael in the student body president race, and Michael received only less than 3% of all votes. ("The Immaculate Election") In G.O.B.'s yearbook, the high school's name reads Balboa High School and he was also classmates with Eve Holt, whom he impregnated. ("The Cabin Show")

Decades later, George Michael and Maeby attended high school with Steve Holt, a repeat senior. The three auditioned for the play Much Ado About Nothing and Tobias weaseled his way into the director's seat for the play. ("Bringing Up Buster")

Annyong starts high school and George Michael falls in love with his ethics teacher Beth Baerly. Michael thinks George Michael wants her as a mother figure so he sleeps with her, and G.O.B., who was dating high schooler Shannon at the time, sleeps with the civics teacher Mrs. Whitehead is attempted revenge. All the Bluth boys lose Beth to a dance with Jeremy at the Diversity Dance. ("Shock and Aww")

Maeby begins making money by posing as BS patient Surely Fünke. A fundraiser is held for her. ("Altar Egos") Surely "rolls" for class treasurer before Maeby kills the character off. ("Justice Is Blind")

Trying to flirt with Steve Holt, Lindsay hangs around the high school. Maeby convinces him that the hoarse Lindsay is a transvestite, but he is impressed rather than frightened. George Michael's grades start to slip because he flirts with classmate and girlfriend Ann Veal all day, so Michael makes him see an optometrist, which hurt his eyes even more. ("Sad Sack")

Ann wants to help George Michael win student body president with a "V.I.R.G.I.N." campaign but Michael has G.O.B. shoot his campaign video so he won't be made fun of. Ann helps Steve Holt, who is in his third senior year at high school, film an inspiration video while George Michael's rude video makes pupils laugh with his Star Wars reenactment plays. Rav Nadir wins the election when Steve drops out. ("The Immaculate Election")

The next year, Maeby and Steve Holt set up a date. George Michael tells Steve that Maeby is his cousin in the high school bathroom. ("Forget-Me-Now")