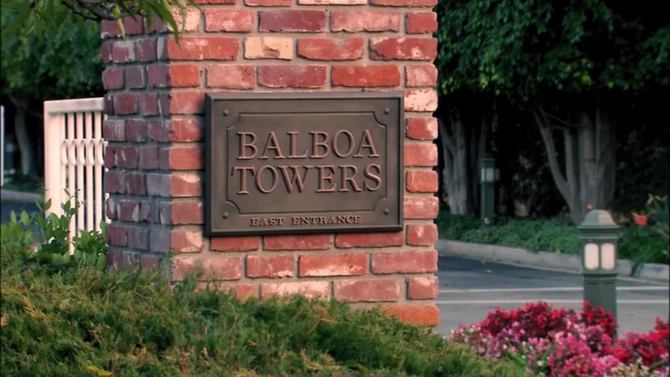 Balboa Towers is an apartment complex where Lucille Bluth, George Bluth, and Buster Bluth lived in a penthouse for several years. Lucille Austero lives in the penthouse opposite the Bluths'.

Other than Lucille, George Sr., and Buster, other Bluths have stayed in Balboa Towers. Annyong Bluth joined the residence when Lucille adopted him. Oscar Bluth occasionally stayed with Lucille while George Sr. was on the run.

In Spring 2006 George moved out of the penthouse under the guise of a divorce from Lucille. In reality, he moved to the border of Mexico so he could gouge the US government for the land. (4x2 — "Borderline Personalities") A year later Lucille was sent to Orange County Correctional Facility L.I.T.E. and Buster went to live with Lucille 2 in her penthouse. (4x10 — "Queen B.") Maeby then moved into the Bluth penthouse for several years. (4x12 — "Señoritis") In summer 2011 Lindsay and Marky Bark moved into the penthouse with Cindy the Ostrich. They thoroughly destroyed it. (4x8 — "Red Hairing") Lindsay moved out after Marky was arrested in 2012 and Michael moved back into the penthouse and cleaned it up. (4x1 — "Flight of the Phoenix")

Retrieved from "https://arresteddevelopment.fandom.com/wiki/Balboa_Towers?oldid=53689"
Community content is available under CC-BY-SA unless otherwise noted.