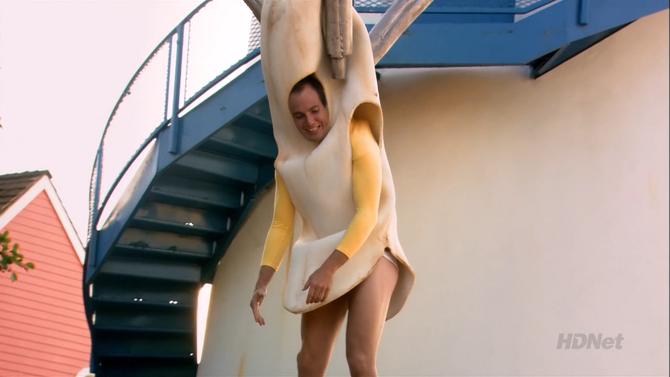 After alienating all his employees by bragging about his expensive suits, G.O.B. wears a banana suit to connect with them and show humility.

G.O.B. wears the suit in the Banana Stand while trying to win the Bluth Company employees back. The suit has a removable peel, that G.O.B. took off when he got too hot. Lucille's Mercedes-Benz W126 S-Class slipped on the peel and she crashed into the stand. ("Afternoon Delight")

George Michael later wears the banana suit (and nearly passes out due to heat exhaustion) when he and his father are competing against G.O.B. and Steve Holt's Banana Shack. He wears the jetpack while in the suit and apparently catches the suit on fire. ("Making a Stand")

Tobias wears the bananan suit at the Family of the Year ceremony, due to the Banana Stand's disappereance the suit is useless. Tobias angered, goes away. ("Sinking Feelings")