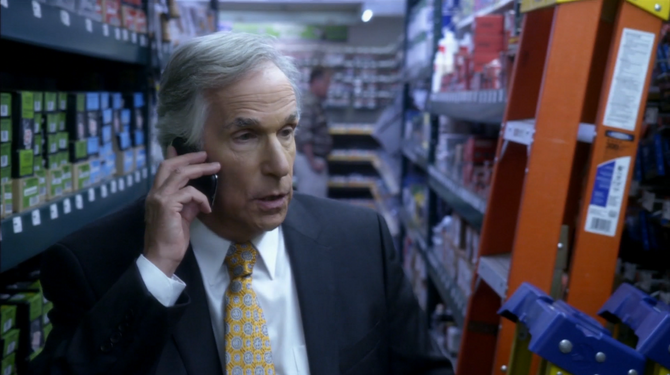 Barry Zuckerkorn was the Bluth family's incompetent defense attorney. He attempted to guide the Bluths through George's trial but rarely was on top of the case. He was finally fired by Michael at the end of "The Cabin Show". He was disbarred in "The Untethered Sole".

Barry has a devious sexual life and has had his own run-ins with the law. He doesn't have strong friendships in the law community and doesn't have the strongest understanding of California's legal system.

Barry was played by Henry Winkler, otherwise most famous for playing Fonzie on Happy Days. He appeared in 33 episodes of Arrested Development over all five seasons. In the fourth season, a young Barry Zuckerkorn is played in flashbacks by Max Winkler, Henry Winkler's son.

Barry isn't the most informed lawyer. Barry admitted to George that he paid a look-alike named Stuart to take the California Bar examination for him, and that he went to law school in the Virgin Islands. ("Borderline Personalities")  As a young lawyer, he advised Lucille and George that the government can't accuse a husband and wife of the same crime, and that if they hold their meetings on boats in international waters they'll be fine. ("Borderline Personalities")

Decades passed and the Bluths didn't catch on to his incompetence. He told the Bluths that a $20,000 bond to release George for the Living Classics Pageant was refundable, but it wasn't. ("In God We Trust") At George's arraignment, Barry was caught off guard by the sheer number of crimes George was charged with that he attempted to run away. ("Beef Consommé") He advised the Bluths to steal evidence from Maggie Lizer's house. ("Altar Egos") He advised Michael to lie to the police when he was interrogated. ("Not Without My Daughter")

He accidentally entrapped Michael in a question about his whereabouts. ("The One Where Michael Leaves") He used Ask Jeeves to answer questions about the law ("Queen for a Day") and frequently misbehaved in the courtroom, including spanking Maggie or harassing Loretta. ("Hand to God") Barry takes credit for Michael's divorce, but there was never a divorce -- Tracey Bluth died. ("Out on a Limb") When G.O.B. asked Barry what he was doing at a drag club, Barry said "Wow, you should be the lawyer." ("Motherboy XXX") When Michael fired Barry in Reno, he told Michael that he would have to turn to prostitution because the Bluths were his only client. ("The Cabin Show") He was rehired after the Bluths soured their relationship with his replacement Bob Loblaw.

He wore a maritime costume to try and impress the harbormaster when Lucille was arrested for stealing the RMS Queen Mary and told the Bluths that it was 'good news' that their legal costs would make him a fortune. ("Queen B.") He missed Lucille's first hearing. ("Flight of the Phoenix") He arrived unprepared and completed a child's connect-the-dots during Lucille's trial. ("Queen B.") When P-Hound sued George Michael over Fakeblock, Barry's only advice was take to the sea!. ("It Gets Better")

Problems with the law

Barry's problems with the law don't stop at his professional ineptitude. He is late to the Bluth family's hearing because he had his own court date. ("Beef Consommé") He is arrested for picking up an undercover officer dressed as a prostitute. ("Justice Is Blind") He also once ran over Tobias in his car, and ends up in prison for a short amount of time. ("The One Where Michael Leaves") He also mentions that the L.A. Kings have a lawsuit against him, after he wrongly sues them. ("Queen for a Day")

Barry's secretary, James Alan Spangler, successfully sued Barry for his anti-gay remarks. James used one of Barry's rivals, Wayne Jarvis, as his legal counsel. ("In God We Trust") Barry and Judge Lionel Ping are not fans of each other and do not enjoy seeing each other in court. ("Beef Consommé") Barry acts extremely unprofessional with Maggie Lizer, including spanking her in court. ("Out on a Limb") Barry is later fired by the Bluth family for Bob Loblaw. ("The Cabin Show") Barry hires Bob Loblaw to represent him when he is charged with sneaking into a high school locker room. ("The B. Team")

Although Barry flirts with Lucille, his personal life is a bit of a mystery. He made Freudian slips about some inmates at prison. ("In God We Trust") He propositions cross dressing prostitutes ("Altar Egos") and was once arrested for propositioning an undercover police officer. ("Justice Is Blind") He brought a young woman prostitute to the police station to talk with Michael. ("Not Without My Daughter") He is also known to meet late at night at truck stops, presumably for sex. ("Let 'Em Eat Cake")​​​​​​ Barry is proud to admit he enjoys a "hot ding dong" and has asked George Michael to give him a "little tap on the fanny". He is also the only person to recognize a close-up shot of testicles. ("Sad Sack") Barry purchased the Tobias is Queen Mary nightclub from Tobias, namely for the dungeon area. ("Queen for a Day") Barry mentioned to G.O.B. that he ran into a judge of his divorce hearing at a drag club. ("Motherboy XXX") Barry has winked suggestively at Wayne Jarvis' assistant. ("Missing Kitty") Barry knows L.A. prices for prostitution - $50 for making out - but not Reno prices. He later made out with Tobias for $50. ("The Cabin Show")

When he is first incarcerated, George mentions that his attorney told him the government couldn't charge a husband and wife with the same crime. Barry isn't mentioned by name but it was likely him. ("Pilot")

Barry helps the Bluth family get George out of prison for the Living Classics Pageant. He tells them that the $20,000 is refundable, but in the end it is not.("In God We Trust") He helps the family prepare for George's arraignment but flees the courtroom when he is frightened by the number of charges. ("Beef Consommé") Barry fails to help the family read the plea deal the government has offered the Bluths. ("Altar Egos") When he finds out Michael is sleeping with Maggie, he convinces him to snoop in on her evidence. ("Justice Is Blind")

When Kitty goes missing, Barry suggests lying to the police. ("Not Without My Daughter") Barry helps Michael and George prepare for polygraph tests that could either incriminate or free George. ("Let 'Em Eat Cake")​​​​​​

Barry meets Michael at the police station and informs him that he is not allowed to leave the state. He later runs over a blue Tobias in his car at dusk. ("The One Where Michael Leaves") Maeby asks Barry for advice on how she can emancipate herself from her parents. ("Good Grief") Tobias helps the Bluth disprove evidence of model homes in Iraq by revealing the photographic evidence is actually a close-up shot of balls. ("Sad Sack") Barry advises the Bluth family to not sell their stocks when some of the shares are unfrozen, but their greed gets the best of them and they ignore him. ("Queen for a Day")

Michael meets with Barry, who is representing Skip Church's Bistro in a legal battle against Loretta and Maggie Lizer over the bistro's unhealthy Skip's Scramble. He finds out Loretta is using a fat suit, and tells Michael that Maggie is suing him for patenity. ("Out on a Limb") Barry accuses Loretta of wearing a fat suit in court by pulling up her shirt. This angers Loretta and Judge Ping. ("Hand to God")

Michael asks Barry where George has fled to, and Barry informs him that he is in Reno. When Michael finds Barry in Reno posing to be working for the Blue Man Group, he is fired by Michael for his many years of poor service for the Bluth family. He fears he has to turn to prostitution to make money. ("The Cabin Show")

In the early 1980s Barry and his father Herb Zuckerkorn met with a young Lucille and George Bluth. Barry, who was just back from law school in the Virgin Islands, gave the Bluths terrible legal advice: that a husband and wife can't be arrested for the same crime, that laws broken out at sea can't be punished, and therefore "take to the sea!" (4x2 — "Borderline Personalities") He also said if you don't sign any documents, you'll never be found guilty. His father sadly sat by and nodded in acceptance. (4x4 — "The B. Team")

On February 10, 2006 after Lucille crashed the RMS Queen Mary Barry met the Bluths at the harbormaster's lodge wearing a "nautical suit" of his own. The harbormaster wasn't as appreciative as Barry hoped he'd be. Barry then broke the good news to George and Lucille: that their legal fees would cost a fortune. (4x2 — "Borderline Personalities") He then told Lucille she needed to come up with a good testimony. She used Buster's tumble off the boat as her excuse for turning the Queen Mary around which led it its' capsizing. (4x10 — "Queen B.")

Months later at George Michael's graduation party Barry admitted that he missed Lucille's first hearing. Michael, upset at Barry's ineptitude recited precise maritime law to which Barry responded "maybe you should be the maritime lawyer." (4x1 — "Flight of the Phoenix") Barry snacked while Lucille coached the Bluths through their responsibilities at the trial, including Buster's star testimony. (4x10 — "Queen B.")

The next year at Lucille's trial held at a seafood restaurant, Barry sat with Lucille while her entire family failed to show up for the trial. The only person who arrived was Lucille Austero so Lucille Bluth decided to cross-examine her herself while Barry completed a connect-the-dots game. (4x10 — "Queen B.") Lucille was sent to prison and a shocked Buster arrived late to a blasé Barry at the seafood restaurant. (4x14 — "Off the Hook")

Years later in 2012 Maeby found Barry trying to sneak into the locker room of Balboa High School. He told her it is illegal for people over 21 to be near high school. She photographed him and he offered her free legal advice. (4x12 — "Señoritis")

Days later Barry drove down to Father B.'s Colony to tell George he owed $15 million on a balloon payment for his land. He suggested George bribe Herbert Love to start the wall project. Barry then ran into Oscar, and believing him to be George gave the game away about the US/Mexico wall plan. (4x2 — "Borderline Personalities")

The next day George called Barry asking for a way to stop the wall project after learning his land was in Mexico. Barry was buying a stepladder at a hardware store. (4x6 — "Double Crossers") Hours later Barry called Michael to tell him Ron Howard wanted to meet. During the call, Barry was with his lawyer Bob Loblaw at the high school, demonstrating to the jury that he could not reach the knob into the locker room. (4x4 — "The B. Team") After meeting with Ron Howard, Michael called Barry again for advice on getting his father's signature. Barry was being fingerprinted and photographed at a police station. (4x4 — "The B. Team")

Barry Zuckerkorn appears in Season Five and is released from jail by Michael accidentally. Barry decides to live in George's Winnebago, but when it drives off without him, Barry gets a motorcycle and chases it to Mexico. He also reveals to the Bluths that there is a photo of the staircar in Mexico, with two heads in it--one spikey, one bald. He is disbarred in the episode "The Untethered Sole." He recommends The Guilty Guys to the Bluths.