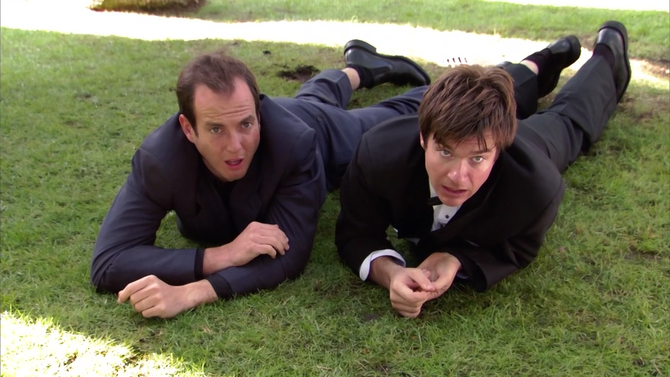 After learning that Marta has feelings for him, Michael goes to her and they decide to get permission from G.O.B. before taking things to the next level. Meanwhile, Lindsay and Tobias finally get to the heart of his "never-nude" problem and George Sr. faces his first hearing.

The Bluth brothers in love

G.O.B. asks Michael to keep him informed on his investigation of "Hermano", the nonexistent man having an affair with Marta. Unbeknownst to G.O.B., Michael is "hermano". Before they proceed with their romance, Michael and Marta agree to tell G.O.B., who refuses to take any of Marta's calls, thinking she is intending to break up with him.

When G.O.B. tells Buster that he wants to fight hermano Buster clues him into the definition. Buster also tells G.O.B. he is looking to explore his newfound adulthood by getting in a fight. Buster suggests "hermano" may be Tío, Marta's brother on El Amor Prohibido. G.O.B. confronts the soap opera star but is knocked out. Michael visits him and confesses that he is the one having an affair with Marta. G.O.B. accepts the truth with a smile.

Buster, also in love with Marta, pays a mariachi band to serenade Marta and sees Michael kiss her and enter her house. He tells G.O.B. this is why Michael is late to George's arraignment and G.O.B. changes his mind and begins fighting Michael in the courthouse. Their fight continues out into the lawn. Buster joins, hoping to be punched in the face. Marta sees the men fighting and stops them, informing she could never be with someone who dishonors their family as much as they do.

Barry Zuckerkorn meets with Lucille and Michael at prison to discuss George Bluth's upcoming arraignment. Barry asks the family to be prepared to look loving and supportive for ten full minutes, and they ask to shorten it to five.

The next day the arraignment happens but only Lucille and G.O.B. are on time. Barry is extremely upset that Judge Lionel Ping is leading the hearing. Buster staggers in with a mariachi band and when Michael arrives, G.O.B. interrupts the session by fighting Michael. George, never having heard all his charges read to him in order, panics and attempts to flee but ends up in his jail cell. Barry, also overwhelmed by the charges, attempts to run away.

Maeby complains to George Michael that the family doesn't ever pay attention to her so George Michael begins a paternity investigation based on Tobias's revelation that he couldn't impregnate Lindsay. After receiving no help from G.O.B. or Tobias, George Michael turns to Lucille who informs him that the Bluth family spent $130,000 on getting Lindsay pregnant. Maeby comes to terms with her frazzled family, understanding they are better than nothing. George Michael decides to not tell her of her conception.

Tobias, upset that the role of Frightened Inmate Number Two is a shower scene, fights with Lindsay about their marriage and his Never Nudity. She helps him overcome his affliction by seducing him. He overcompensates by appearing nude at the next morning's breakfast.