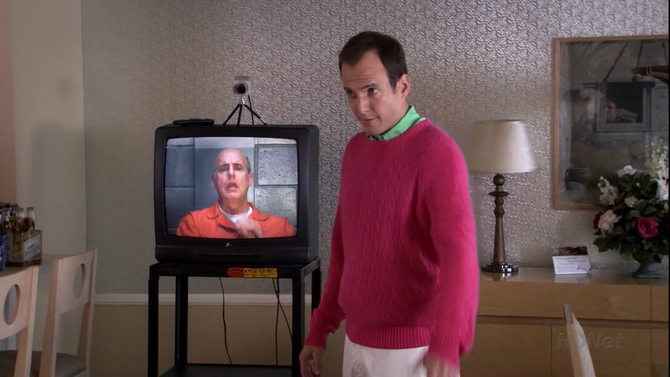 "Best Man for the Gob" is the nineteenth episode of Arrested Development's first season.

George Sr. uses G.O.B.'s bachelor party as an opportunity to set up his accountant in a compromising position so that he can blackmail him. Meanwhile, Michael tries to prove he's a fun guy, and the Fünke's reunite their family folk-music band.

Michael and Bluth Company accountan Ira Gilligan meet in the frigid and hot Bluth Company offices about missing funds. G.O.B. arrives and calls Ira "Gilligan", which he hates. Alone, Michael tells G.O.B. he is going to throw him a bachelor partyas his Best Man but G.O.B. reveals he is going to get a divorce and asks Michael to help convince his wife to dump him. Michael meets with George about the missing funds and Ira and George tells Michael to show Ira some fun to get him on the family's good side. George then supposes he should ask G.O.B. to do it since Michael "isn't fun".

The next day at Lucille's cocktail party for G.O.B.'s wife, G.O.B. has changed his mind after talking to George and is going to stay married and have a bachelor party with their father as Best Man. This upsets Michael so he decides to take his son and have "real fun" on a fishing trip. George, meanwhile, gives G.O.B. orders on how to use a narcoleptic stripper to scare Ira into fleeing the country. On Lucille's behest, G.O.B. brings Buster along to his party which is otherwise attended exclusively by Hot Cops. Buster drinks all the red corn syrup, thinking it is juice, and starts to eat the giant cake holding the narcoleptic stripper. The stripper punches him through the cake, and they both pass out.

George Michael and Michael attempt to get an early night for their 4am wake up call to go fishing but George Michael blatantly guilt trips his father into going to the bachelor party so George Michael can go see the Fünke band. At the party, G.O.B. is trying to get Ira to drink when Michael discovers the stripper and Buster. G.O.B. pulls the ripcord and flubs the set up and fails to convince Ira that he has killed a stripper and must flee the country. Ira storms out, swearing he'll testify against the family. Michael convinces G.O.B. to turn the TV which is teleconferencing George in from prison off. G.O.B. works up the courage, powers it off, and thanks his brother for being there for him.

At that moment, G.O.B.'s wife enters the hotel room and reveals that she is in love with his brother. G.O.B. socks Michael in the face but his wife reveals she meant "-in-law". and is leaving to be with Tobias.

In an attempt to rekindle their magic from the mid-1990s, Tobias attempts to get Lindsay and Maeby back together for Dr. Fünke's 100% Natural Good-Time Family Band Solution, a band underwritten by the Natural Life Food Company. During practice, Lindsay is miserable and attempts to recreate her own happiness from the 1990s, which mainly came from the psychiatric drug Teamocil. George Michael attempts to join the band on woodblock because he claims to have perfect rhythm but Tobias refuses to let him join.

At the Wellness Convention Lindsay storms away from the stage before the show. Maeby, who was only participating so her parents would otherwise leave her alone, left the convention as well. Performing solo, G.O.B.'s wife, a longtime Family Band Solution fan, walks through the crowd playing a harpsichord and is also joined by George Michael on woodblock on stage. The song wraps and Tobias fires George Michael from the band.

Retrieved from "https://arresteddevelopment.fandom.com/wiki/Best_Man_for_the_Gob?oldid=54812"
Community content is available under CC-BY-SA unless otherwise noted.