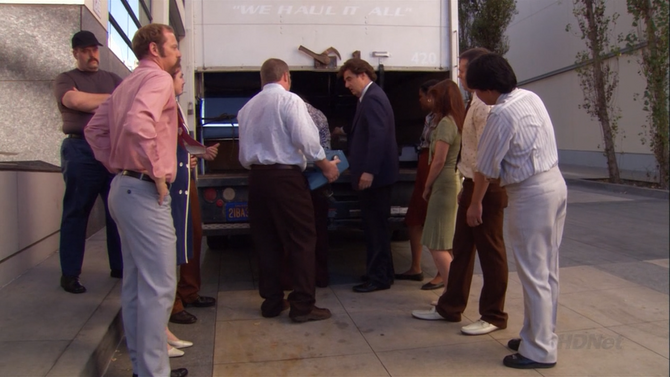 To cut down on costs, George Bluth would hold mass firings known as Black Fridays.

George would have his old Bluth Company staff lock all computers and valuables in a truck before firing them all. The following Monday the younger (and cheaper) staff would unload the truck of computers and office supplies. George enjoyed the whole process.

In 2006 when all Bluth Company computers disappeared Ted and other employees thought another Black Friday was happening. However, George had just taken them to Balboa Towers to wipe their memory. Michael thought he would have to fire everybody when he thought Nellie stole the remaining Bluth Company funds, but instead she paid everyone and bought them all new computers, saving the day. ("Family Ties")

Narrator: Before firing his employees, however, George Sr. had been sure to clear the office of its valuables.

Employee #1: So, when do we get to see our new, fancy office?

George: Soon as you get your new, fancy job. You’re all fired.

Narrator: The employees never saw it coming, even though their first task was often to unload computers from a rental truck.

From "Family Ties"
Retrieved from "https://arresteddevelopment.fandom.com/wiki/Black_Friday?oldid=23114"
Community content is available under CC-BY-SA unless otherwise noted.