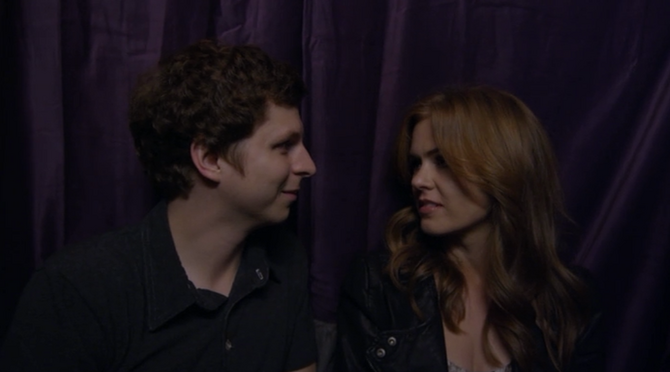 "Blockheads" is the fifteenth and final episode of Arrested Development's fourth season.

George Michael tried to reconnect with his father but is finding himself overwhelmed by the responsibility of running his business.

After getting off of a vicious game of voicemail lie tag, George Michael meets back up with Rebel in The Ealing Club. They both see their fathers approaching so they duck into a photobooth and make out. The next day he attempts to play basketball but his nose gets broken. He calls his dad to make plans to make amends but Michael says no, planning on being with Rebel. George Michael then calls Rebel and she agrees to meetup. Rebel leaves the restaurant so Michael calls his son again, who in turn tells him he's already made plans. Rebel arrives and they make love and she tells him she's enamored by his careless ways and that he's smart enough to make Fakeblock.

George Michael is kicked out by P-Hound from his dorm room and G.O.B. happens across him, hoping to feed him a Forget-Me-Now (pill) to make him forget the events at the Gothic Castle. G.O.B. is unsuccessful, and instead he strikes up a conversation with his nephew, during which he mentions that he is selling properties in Sudden Valley, and George Michael decides to buy one in an attempt to make his father proud. As George Michael shows up in the neighborhood, all the registered sex offenders living there are thrilled to discover that he's 22 but looks 16 so they give him gifts and play football with him and throw him pool parties. Rebel visits with her son Lem and sees that his new house shows he's not as easy-going as she hoped he was. George Michael reveals the rocky truth of the relationship to Maeby, who he then fires for hyping Fakeblock too much. Out of spite, she tells Michael that Rebel was turned off from George Michael's pressure in their relationship. He gets her film rights and heads over to Rebel's apartment where he plays it cool and tries to push her away, which draws her to him. They make love and Michael steals a photobooth photo from her dresser but discovers that it is George Michael and Rebel in the photo.

Michael calls Maeby and tells her she's out of the movie then heads to Sudden Valley to fire G.O.B. He runs into George Michael, who just wants to impress his father and gives him a heartfelt thank-you for raising him. Michael tries to leave before George Michael changes the subject to talk about his new girlfriend and how things are rocky. George Michael asks his father how his love life and movie project are going. Michael, feeling sorry for his son, decides to back out of pursuing Rebel and answers that neither were meant to be.

At Cinco de Cuatro, G.O.B. is in negotiation with a Mongolian horde he hired to build the wall between Mexico and America and George Michael approaches, asking for help with Rebel. G.O.B. gives him horrible advice so George Michael decides to do the opposite. G.O.B. then tells George Sr. about the horde and George Sr. reveals that the family have no money for the project. G.O.B., in turn, breaks the news to the Mongolian horde that they won't get paid, leading them to plunder and ravage Cinco de Cuatro in retaliation, during the act of which they are mistaken for a group of rioting Latin-Americans. Michael meets with Lucille Austero and attempts to seduce her, but when she refuses he threatens her. George Michael, nearly ready to reveal the truth about Fakeblock, finds a note from the internet hacktivist group Anonymous threatening to "screw" him if goes forward with the plans to publicize Fakeblock, but, thinking the note is a booty call from Rebel, he decides to continue the lie and instead gives a short keynote speech about Fakeblock, claiming that it "is real". He then heads for Rebel's apartment and after showing her the note he found, which she mistakes as a booty call from him, they spend the night together.

The next morning, Michael, having been drugged with a forget-me-now the previous night, has forgotten the heartfelt conversation he had with George Michael yesterday and calls Rebel and tells her he wants to make things work with her so she tells him to come over later. George Michael drops his nonchalant act and tells Rebel that he cares about her and wants to make things work. She says yes and he leaves. Outside he runs into his amnesiac father who has a cactus with a note for Rebel. George Michael realizes that Michael is the other man and Michael, who already knew, plays it off until he blurts out that they were both in the photobooth separately with Rebel. Michael is unable to provide an answer when his son asks him about his mention of the photobooth and, angry that his father knowingly slept with Rebel behind his back, George Michael punches him the face. The episodes then ends on a tense, silent stare-off between father and son.

G.O.B. receives a call from his mother who informs him that he is the new Bluth Company president now that Lucille Austero has gone missing, but she also warns him to "keep his nose clean" and steer clear of any scandals. He then receives a voicemail from Tony Wonder, who took a Forget-Me-Now to forget their night of gay love, but G.O.B. remembers it clearly.

Police arrive at Lucille Austero's penthouse in Balboa Towers and arrest Buster for her murder. Ron Howard and Brian Grazer celebrate that they have the rights to his story and that the movie they make about him will be their next DaVinci Code.

In the chronological re-cut of season 4, footage from Blockheads is used in 5 different episodes. The original cut of Season 4 is slightly longer than the re-cut version. Because of this, various lines of dialogue and sometimes even scenes are cut. These changes, as well as which scenes appear in which remixed episode, are listed below:

P-Hound: You know what? This is no longer a peace pizza. That is a war pizza!

George Michael: Okay, that's fine. Do you want to take it back, or...?

Rebel Alley: Well, I suppose anything goes in a dorm.

George Michael: You got that right. Although, we should probably go inside because they don't like us hanging out in the hallways, actually.

Rebel Alley: You know what really impresses me about you? How little you try to impress me.

George Michael: Well, I am to not please.

→ See more quotes from "Blockheads" at Transcript of Blockheads. 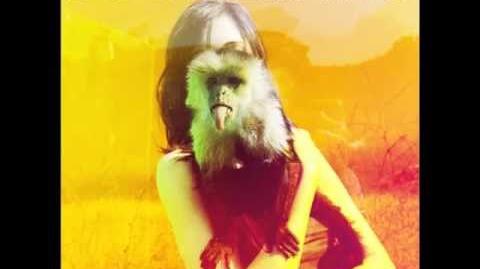