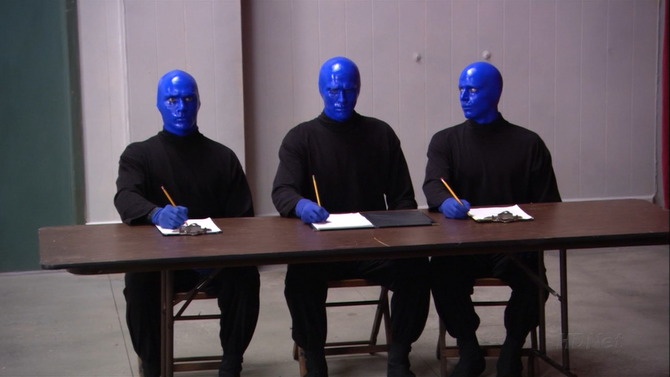 The Blue Man Group are a musical troupe of men painted blue. Tobias is an aspiring member and George Bluth becomes a member while on the lam.

Tobias goes to a Blue Man Group concert, thinking it is for depressed people, also known as "blue". But when he finds out what the Blue Man Group really is, he attempts to join them. ("The One Where Michael Leaves") He auditions in front of the group but doesn't hear back. To continue practicing, he wears blue paint around to stalk Lindsay while they are in their open relationship. ("The One Where They Build a House")

Tobias puts blue makeup on, hopeful that the BMG would call him to be a stand-in. They do not, and he is instead tackled by Ice who is searching for George, mistaking him for the blueprint. ("¡Amigos!") Later, Tobias receives a call from "BLU" and assumes it is from the Blue Man Group. It is from the Bluth Company and he blue himself unnecessarily. ("Afternoon Delight")

A handyman tells Michael that there are no pipes draining water away from the Model Home, but he did find a lot of blue paint and pieces of denim. Tobias was asked to talk to a group of "blue men" and wore blue makeup, unaware they were "blue" as in depressed. Tobias then received a piece of good news, and was asked to work as an understudy for the Reno BMG. When he and Kitty arrived, the position was taken by George Bluth. ("Righteous Brothers")

Although they eloped together, Tobias and Kitty began to argue. Kitty had been sleeping with George on the side and his Blue Man Group handprints on the back of her head and on her breasts. Tobias attempted to make Lindsay jealous by making out with a Kitty look-alike but resorted to wearing a Kitty costume himself while making out with Barry. ("The Cabin Show") George briefly wears Blue Man makeup while fleeing from Reno. ("For British Eyes Only")

According to Maeby, Tobias has been talking about being a back-up for the group while pretending to be Mrs. Featherbottom. ("Saving for Arraignment Day")

Tobias leaves blue handprints and paint around the Model Home, seen in Season Two and Season Three. A blue handprint can also be seen on Netflix when performing a search for the word "blue", as part of their Season Four viral campaign.

("The One Where Michael Leaves")

("The One Where They Build a House")

Although not created by Tobias, some blue handprints appear in Season Three, a nod to his days as a blue man.

("For British Eyes Only")