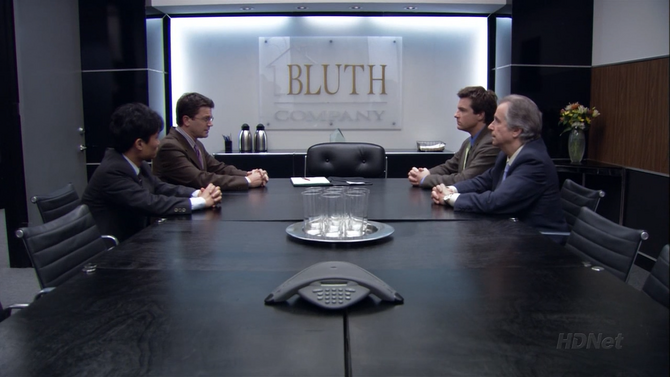 The Bluth Company is a real estate development firm founded by George Bluth. Sometime during the late '80s or early '90s, the company was involved with Saddam Hussein in creating homes in Iraq; these homes went undiscovered by American authorities until about a decade later. In the series' first episode, George's wife Lucille Bluth was named CEO of the company shortly before he was arrested for fraud. The company is based in the Bluth Company offices.

The company was eventually purchased by Lucille Austero who renamed the company the Austero Bluth Company.

George Bluth founded the company in 1953.

George was the Chief Executive Officer, but announced at his retirement party that his wife, Lucille Bluth, would be the new CEO of the company, surprising his son Michael Bluth, who had expected to take his father's place as head of the company. Just after the announcement, the U.S. Securities and Exchange Commission boarded the boat upon which the party was being held and arrested George for defrauding customers and spending the company's money on "personal expenses." (His family, with the exception of Michael, was also using the company's money for personal expenses).

Lucille placed her favored son Byron "Buster" Bluth in charge of managing the company, but he soon showed himself to be completely incompetent and the family asked the departing Michael to return and act as President. Most of the action in the series comes from Michael's futile attempts to try to get the company back on track, while the family continues to take money from it, and hide their activities.

After George escaped from prison, Michael was being investigated for aiding and abetting. The board felt it was best if Michael stepped down and G.O.B. ran the company as President. G.O.B. failed to make any good decisions and Michael continued to do the day-to-day work while working out of a supply closet. G.O.B. eventually stepped down and Michael resumed the post.

At the end of the first season, it is revealed that the company is suspected of illegally building homes in Iraq for Saddam Hussein. A mysterious box of evidence emerges, labelled "H. Maddas" ("Saddam H." backwards). George is to be charged with "light treason". As the Bluth family attempts to get (and later keep) their father out of prison, it eventually comes to light that George was used by the CIA to infiltrate Hussein's network and spy on the country's leader. This revelation saved George.

Moments before her arrest, Lucille sells the company to Stan Sitwell. After years of investigation, the SEC finally deduced that it was Lucille who was the brains of the money laundering. ("Development Arrested") Stan immediately sold the shares to Lucille Austero for a loss. Months later, Michael sold his shares to Lucille Austero, giving her a majority ownership of the company. She renamed the company into the Austero Bluth Company. ("Flight of the Phoenix")

The Bluth family has also owned and run a frozen banana stand started by George in 1953 on the Newport Beach boardwalk on Balboa Island. The stand was a popular meeting place for the buying and selling of marijuana in the 1970s. As the stand itself was built to resemble a large yellow banana, it was commonly known as "the big yellow joint", and became the topic of a hit song by the same name.

During the series, Jim Cramer of the hit CNBC show Mad Money appeared to discuss the recovery of the Bluth Company's stock. He appeared to first announce that he had upgraded Bluth Company stock to a "Don't Buy" from a "Triple Sell", and then to say that the stock was not a "Don't Buy" anymore, but a "Risky". Each upgrade signified a step in the right direction for Michael as he rebuilt the company's image, but also led to his family trying to sell their shares for immediate monetary gain. The upgrades were also shown to be brief moments of celebration for Michael and George Michael, as well as the firm's employees. ("The Cabin Show")

During the final episode, when Cramer upgraded the stock to "Risky", the employees of the Bluth Company put up signs that read "Risky Business" in the office. ("Development Arrested")

Retrieved from "https://arresteddevelopment.fandom.com/wiki/Bluth_Company?oldid=51204"
Community content is available under CC-BY-SA unless otherwise noted.