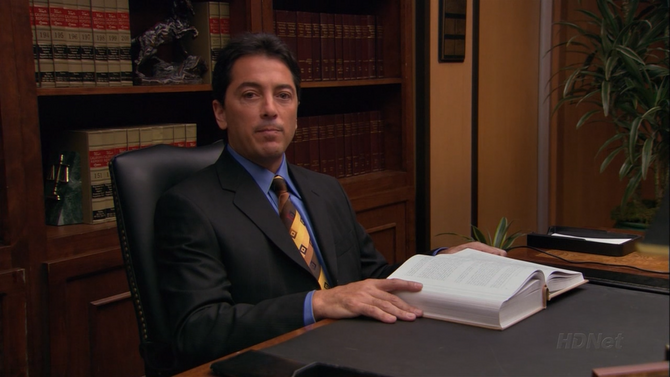 Bob Loblaw (portrayed by Scott Baio) is the Bluth family's new attorney, replacing Barry Zuckerkorn. He appears in four episodes of Season Three and one episode of Season Four.

Bob Loblaw is a no-nonsense attorney who is always in the company of his stenographer secretary who records all of his meetings. It is assumable he is single, since he ultimately accepts Lindsay's advances, but he does have a daughter named Hope Loblaw. ("Notapusy")

When the Bluth family hired Bob Loblaw to replace Barry Zuckerkorn, Loblaw claimed it wasn't the first time he'd been brought in to replace Barry and that he could do anything Barry could do but skew younger (an allusion to Baio's experience replacing Henry Winkler on the show Happy Days.) ("Forget-Me-Now")

Bob specializes in white-collar crimes and markets his sevices toward richer clientelle like company executives. He advertises his services with the slogan "You don't need double talk; you need Bob Loblaw". As is evidenced by this, his name is meant to sound like "blah-blah-blah". Underneath his commercial advertisement is the phrase "Bob Loblaw No Habla Espanol". Adding to the tongue twister-like aspect of the character's name, Bob appears in newspaper articles with headline reading "Bob Loblaw Lobs Law Bomb" ("S.O.B.s") and is known to write on the "Bob Loblaw Law Blog". ("Making a Stand")

Bob meets with the Bluth family at the Model Home to help transition from the recently fired Barry Zuckerkorn. He hired Larry Middleman to act as a surrogate for George Bluth. Bob was attempting to get to the bottom of a supposed British syndicate that George claimed set him up, and he urged the Bluths to not shred the evidence, which G.O.B. assumed meant "shred the evidence". Lindsay then came up to him and flirted with him, but Bob assumed she was asking him to represent her in her divorce from Tobias. Her confusing continues later to when Bob's stenographer record's Lindsay's explicit phone call with Bob. ("Forget-Me-Now")

Lindsay, now acting as Bob Loblaw's nanny to get him to notice her, decides to help Bob's daughter Hope Loblaw  win the Miss Inner Beauty pageant at the Church and State Fair to get on her good graces. Bob advises Lucille to have Buster get someone to sign up for the army in the "one in, one out" program so he can be free from his obligation. He also convinces George to speak at the army's "Startled Straight" program to frighten at risk young men from making poor life choices and ending up in prison. Bob then attends the pageant and cheers as his daughter wins second place. ("Notapusy")

Bob meets with the Buth family at the Bluth Company offices and discusses how someone under the code name "Mr. F" has tipped off the Bluth Company's Japanese investors that the second phase of the Sudden Valley subdivision haven't been started. Michael later calls him to have Rita deported. ("Mr. F")

As one final act of depression, Lindsay asks Bob "Why won't you [bleep] me?!" Bob agrees to see her if she finds another lawyer. Bob sets her up with his paralegal and begins representing Tobias in the divorce arrangements. Bob uses his knowledge of Lindsay's flirtations with him against her in the divorce hearings. ("Making a Stand") In the end, Lindsay and Tobias do not get divorced, and agree to fake it for the sake of the family. ("Fakin' It")​

Bob appears in a newspaper, lobbing a law bomb at the Bluth family. Lindsay and Tobias used up the family's $100,000 retainer with Bob on their divorce hearings, and Bob refused to serve as their lawyer anymore. ("S.O.B.s")

When Barry Zuckerkorn is charged with sneaking into a high school locker room, he is represented by Bob Loblaw who drops a law bomb on the jury. (("The B. Team")

Gob jokes about Tony being “as straight as Bob Loblaw at a high-school prom.” Tony doesn’t get the reference, so Gob explains: “He’s an attorney we were forced to use one year, and I guess he likes ‘em young.”  Two women alleged that Scott Baio, who plays Loblaw, molested them when they were teenagers. ("Premature Independence")