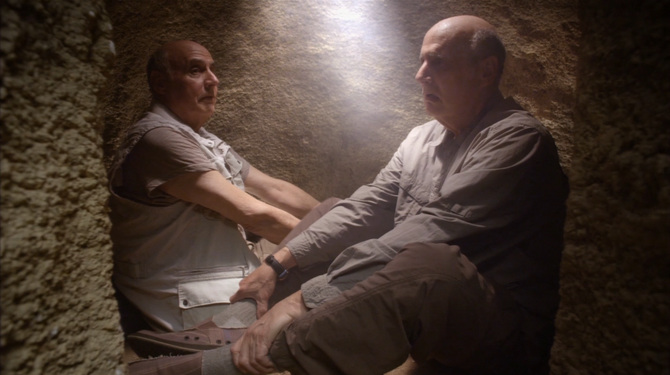 George and Lucille create a plan to get back on top by making a border between the U.S and Mexico, but George Sr. gets sidetracked by a new get rich quick scheme involving his brother Oscar's Californian-Mexican land.

After his exoneration party and his wife's arrest, George begged Michael to turn The C-Word around so Lucille wouldn't flip on him. After meeting with Barry at the harbormaster's lodge and agreeing to help Lucille's defense, George visited Stan Sitwell and tired to cash out. There he saw Stan's plans to build a fence on the border of Mexico (but George thought it was a 15 mile tall monument to George W. Bush). Lucille suggested the underbid Sitwell and in order to do so, they would need to fake a divorce to avoid any legal trouble.

Soon thereafter, George became lonely and visited the Balboa Club where he found his twin brother Oscar using his identity to eat lunch with his friends Heartfire, Dr. Norman, and China Garden. Oscar invited him down to see their shared land on the border of Mexico, where they all ate the maca plant and sat in a sweat lodge. George bought the land to gouge the government when they wanted to buy it, but the Mexico wall plan stalled so he came up with a plan to make money in the meantime: build a "Sweat and Squeeze" lodge where he would have Oscar take CEOs into a sweat lodge for an hour, then swap with his twin brother to charge them $10,000 or more for a cup of lemonade.

The plan worked for a while but started to wear George down. He was no longer physically attracted to Lucille anymore either, and their "divorce paperwork"/conjugal visits became tedious. Barry stopped by the desert and informed George that he was $15,000,000 in debt for the land. Barry suggested bribing the far-right Herbert Love to build the wall. George asked Oscar to keep Lucille company while he visited Love and Oscar, who was becoming more and more aggressive, had a passionate night of love with Lucille.

Each character has a specific instrument that plays along with the title music: George has a guitar,

In the chronological re-cut of season 4, footage from Borderline Personalities is used in 8 different episodes. The original cut of Season 4 is slightly longer than the re-cut version. Because of this, various lines of dialogue and sometimes even scenes are cut. These changes, as well as which scenes appear in which remixed episode, are listed below:

Young Barry: Take to the sea!

Barry: But basically, this is a good news / bad news deal. First of all, won't be cheap. It’s gonna cost you a fortune in legal fees.

Oscar: George! Actually, we came in to use the bathroom, but they sat me. And they have mahi-mahi today. Will you join us? Will you have a mahi-mahi on me? On you.

George, Sr.: Fine, but I'm gonna sit opposite you, so it won’t look bad.

George, Sr.: We haven’t had sex since Christmas, Michael!

Buster: I'm... I'm sorry. You had sex seven weeks ago? They were remodeling my room, and I pulled my cot in there, just like camp.

Lucille: We yelled at you to leave.

Buster: Yeah, but then you whispered, “Don't pull out!“