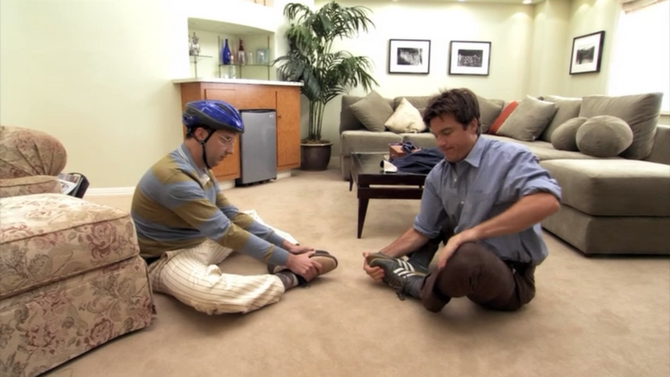 "Bringing Up Buster" is the third episode of Arrested Development's first season.

Michael spends quality time with Buster. George Michael auditions for a school play to get closer to Maeby. G.O.B. breaks up with his girlfriend and has nowhere to go.

Because the family funds are frozen, Buster is on permanent hiatus from his studies and his prolonged time at home is driving Lucille insane. Michael agrees to spend more time with Buster, but that he has to help around the office. Buster interrupts during many important meetings. Back at the model home Buster rags on his mother with the rest of his siblings who are proud of him standing up for himself.

G.O.B., meanwhile, has been kicked out of his girlfriend Marta's house. Michael refused to let him crash at the model home but Lucille agreed to let him stay. When she asked him to zip up her dress he moved out. She also heard from Lindsay that Buster was talking trash about her.

Buster is later put in charge of building a bicycle for George Michael. He forgot to install breaks, however, and crashes when he takes it out for a ride with Michael. A lonely and bitter Lucille returned to the office to get Buster but Michael said that Buster was doing fine without her. Buster then stood up for himself and told Michael that he liked living with his mother. He then firmly told his mother that he would sit in the front seat, a small but significant act of independence from his mother.

At home, Lindsay tries to find an excuse to purchase a new dress. Her mother and Michael tell her to find a job but she becomes determined to cheat the system by hiding the dress in the attic. Tobias finds it and makes it a part of his play.

Maeby quits, annoyed with her father. Tobias gives her female lead role to Steve, assuming George Michael is gay and interested in kissing the jock. George Michael quickly drops his male lead role and it is bequeathed to Maeby. The show opens and Maeby kisses Steve Holt, but doesn't find it pleasant because he is dressed and smells like Lindsay.

Michael finds George Michael at home after quitting the play making cornballs. They both agree that they're important to each other and continue to make the dangerous breakfast.