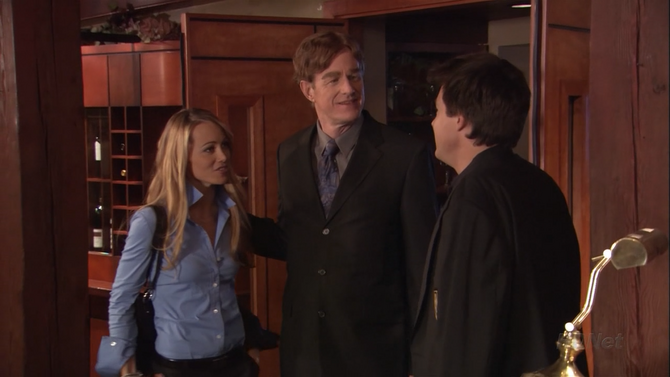 Michael reunites with his long, lost love Sally Sitwell, but faces interference from parents; meanwhile, the two Lucilles need someone to bid on them at the bachelorette auction with Buster already in a relationship.

George Michael asks his father if they have any music he can use for the Christian music bonfire that he and Ann are going to be hosting at the house. Michael suggests Christmas music, but George Michael clarifies that it's not a "Christian music" bonfire but rather a Christian "music bonfire", in which they burn satanic music. He decides to take the day off to buy music to burn and Michael offers to cover for him at the Banana Stand. Lucille asks Michael to bid on her at a charity auction, because she can't have a replay of the previous year, when Buster accidentally bid on Lucille Two instead of her. Michael refuses. Lindsay asks Lucille if she can borrow a fur for her date with the actor Moses Taylor. Tobias announces that he is no longer a standby understudy for the Blue Man Group, showing Michael a cease and desist order he received because of an ad he took out in a trade magazine promoting his own "Blue Man" show. A television news anchor states that a wolf has been spotted in the park. A wolf call sounds from upstairs, and Michael goes to check on George Sr. He requests a hot tub, suggesting that it could be his water supply as well as a place to cook boil-in-the-bag meals. Michael refuses, citing the family's tight budget.

At the Banana Stand, Michael is ordering an air-conditioner when he sees Sally Sitwell, a girl that he had always been interested in but was awkward around because of his father's competition with her father Stan. G.O.B. interrupts their awkward exchange and later reveals that he is still with Lucille Two, even though he says it was a "one time thing". Michael asks Lucille for her country club membership because he wants to run into Sally. Lucille agrees, on the condition that Michael bid on her at the charity auction.

Michael goes to the country club for his "accidental" encounter with Sally, but he has forgotten about the club's dress code. Eventually the club lends him a ridiculously oversized jacket and he is allowed in. When he runs into Sally and her father, they invite him to lunch. Michael notices G.O.B. dining with Lucille Two, and Stan invites them to join as well. At lunch, both Michael and G.O.B. pretend to not be interested in the women that they're interested in. Michael tries to pick up the check, but his card is declined due to increased activity. It is revealed that George Sr. used the card to buy a hot tub and a case of bag-and-boil dinners. Michael confronts George Sr. about his spending. George Sr. tells Michael not to go after Sally because he doesn't want Stan Sitwell saying that his daughter is sticking it to George Sr.'s son. Now that his father disapproves, Michael decides that he will go after Sally. Michael strikes up a deal with G.O.B.; if Michael doesn't tell anyone about G.O.B. and Lucille Two, G.O.B. will siphon gas from Sally's car so that Michael can rescue her in the Corvette.

Tobias, having seen a sign offering a bounty on the wolf that has been sighted, purchases a tranquilizer gun in order to capture the wolf, claim the prize money, and bid on his wife at the charity auction. Lindsay, dressed in a fur coat, is meeting Moses Taylor for their date in the park. While he has steppd away, she breaks her heel, falls to the ground, and howls. Tobias fires the tranquilizer gun at her. Moses returns to find Lindsay knocked out, and leaves her on a bench. It is revealed that he is trying to distance himself from the "Moses Taylor hunts people" scandal started by "a rabid anti-gun fanatic". Michael arrives to help Sally with her car trouble to find that it is on fire. He tries to put the fire out, but is rescued by the fire department before Sally sees his heroics. She arrives in time to find him in a fireman's arms wrapped in a blanket. At the hospital, Michael tries to ask Sally out on a date, but is cut off by a coughing fit. Before it finishes, Sally announces that she has to leave to attend the charity auction. Michael decides that he's going to bid on Sally.

At the Christian music bonfire, Ann is upset because Maeby told people that it was a CD burning party, and they have arrived to copy CDs. At the charity auction, Lindsay is still feeling the effects of the tranquilizer and no one is bidding on her. The amount is down to $10 when Tobias asks Michael for some money to bid on his wife. Michael says that he has $5,000 dollars that he needs to bid on Sally, but that Tobias can make a low bid. Tobias promptly bids $5,000. George Michael makes Ann listen to the Jerky Boys, and after prank calling Michael they share their first kiss. Michael agrees to give Stan Sitwell the Corvette if Stan will give him the money that he needs to bid on Sally. When Sally learns of the deal, she tells Michael that he can have the car back because she's sick of her father interfering with the men that she dates, and that she does not want to be with someone her father approves of. When G.O.B. learns that Stan Sitwell is bidding on Lucille Two, he spends all the money that his mother gave to him to bid on her.

Retrieved from "https://arresteddevelopment.fandom.com/wiki/Burning_Love?oldid=54785"
Community content is available under CC-BY-SA unless otherwise noted.