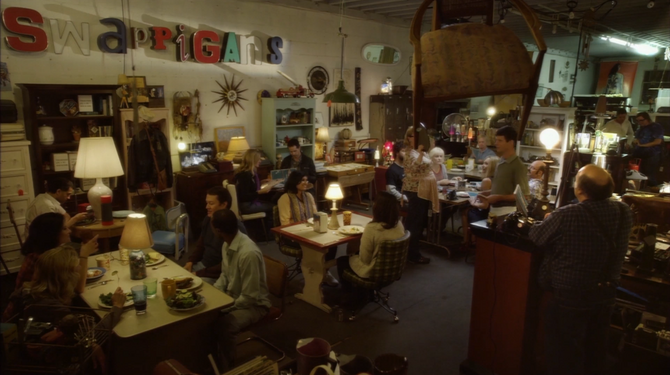 C.W. Swappigan's is a barter-oriented gastro-pub in the Newport Beach area, near the Garden Grove Methadone Clinic.

After Tobias takes Lindsay to the "method one acting clinic" at the Garden Grove Methadone Clinic and the couple runs into Marky Bark and DeBrie Bardeaux, the four meet at C.W. Swappigan's for a dinner. Loretta is their waitress and explains the Leninist/Marxist nature of the eatery. Lindsay trades a cocktail tray for mozzarella sticks but they no longer accept hotel soaps. ("Indian Takers") Marky attempts to barter some butter for dessert but DeBrie eats a large amount herself.

Tobias and DeBrie head to the restroom to clean DeBrie up while Lindsay and Marky bond of their activists causes and she runs away with him. ("Indian Takers") In the bathroom, DeBrie compliments Tobias' acting dream and they kiss, before her heart stops and he rushes her to the hospital. ("A New Start")

Add a photo to this gallery
Retrieved from "https://arresteddevelopment.fandom.com/wiki/C.W._Swappigan%27s?oldid=50308"
Community content is available under CC-BY-SA unless otherwise noted.