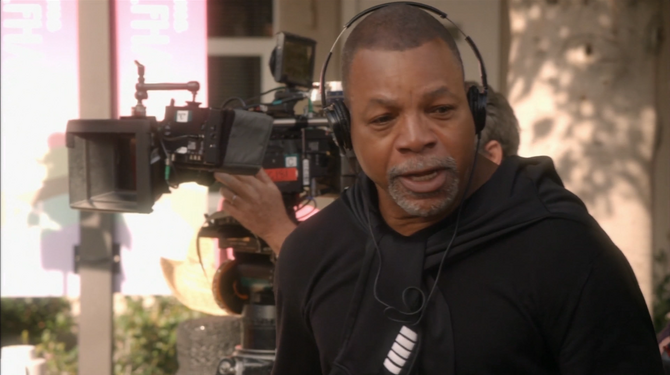 Carl: Whoa, whoa, whoa. There’s still plenty of meat on that bone. Now you take this home, throw it in a pot, add some broth, a potato. Baby, you’ve got a stew going.

Carl Weathers appears as a parody of himself, as a thrifty, mooching Hollywood movie star whom Tobias hires to teach him his craft.

Tobias traveled to San Francisco to take a stage fighting workshop class with Carl Weathers, but he never showed. ("Key Decisions") Tobias later met him in an airport shuttle and found out that Carl intentionally gets bumped from flights to get reward vouchers. Carl also agree to give Tobias acting lessons for $1,100. The two worked together but Carl's advice is predominantly about how to save money in any situation. They traveled together to Rud where Carl managed to get free drinks and leftovers. ("Public Relations")

Carl attended the Bluth family's Valentine's Day party at Balboa Towers and continued to teach Tobias lessons about thrift. Tobias asked for his money back. Carl was introduced to Lucille Austero and the two hit it off and made stew together. Carl set Tobias up with an audition for Frightened Inmate #2, and broke the news that the role is in the nude. ("Marta Complex")

To make the Untitled Michael B. Project Michael called Carl to get the rights to the Bluth family that Carl used in his episode of Scandalmakers. However, Carl said he never got the rights (which, coincidentally got an episode about Scandalmakers made about him, also directed by him.) Carl volunteers to play himself in the film, and became part of the team. ("The B. Team")

Carl Weathers is an extremely thrifty man and often shares his tricks with others: