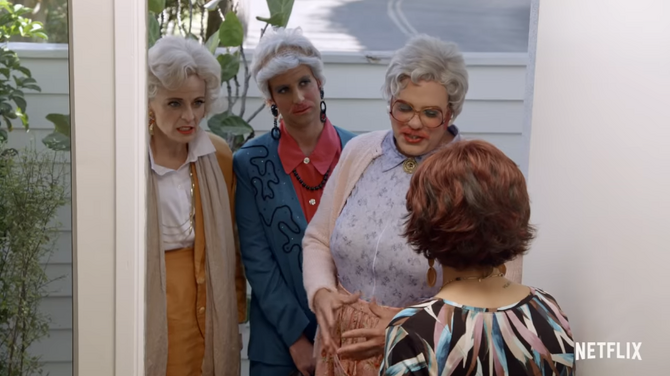 George and Lucille go to the mall to look for Buster, hoping he will pick up her scent. They just miss seeing Buster and Oscar on the tandem bike. George remembers that the last time Buster ran away, he came to the mall, when he was 28. They see a booth selling Old West-style Wanted posters, so Lucille makes an Un-Wanted poster to let Buster know he does not need to be a fugitive. Lucille brings up their debt to the Chinese, and George tells her that he has Michael looking through the books at the Bluth Company. Michael and George Michael are still waiting on the 3D printer to print the "Gated Community" file again.

Meanwhile Tobias and his family are still squatting in Tent City and he sneaks out for food while Buster and Oscar arrive to get some help. They got their leg chains tangled with the tandem bike's chain. The salesman offers to cut their chains with bolt cutters, but the leg irons are stage props, and he easily unclamps the chains from their legs. Buster and Oscar consider splitting up, but they want to continue spending time together, so they decide to hide in a tent in the store. Oscar goes to steal food, warning Buster to pretend to be a mannequin if somebody looks inside their tent.

The 3D printer prints out the border wall, but George Michael prints the file again because of the "background tongue" setting. The Chinese investors call Lucille to say they want to meet for dinner to discuss the wall. George goes into the Tent City while Lucille calls the restaurant. He spots his twin brother Oscar, and goes to talk with him in the dressing rooms. George says that Buster just needs to pay a $75 process fee to get officially released from prison. Oscar likes spending time with Buster, though, and George wants to keep bonding with Lucille, so they make a deal for George to pay the fee, while Oscar keeps Buster on the run.

Tobias goes into the wrong tent and discovers Buster, pretending to be a mannequin. Oscar returns and Tobias tells them that the Tent City will soon change the store display to a Santa Ski Village, so they will all have to leave. Buster mentions that Maeby is living at the Spotted Palm retirement community, so Tobias decides to disguise his fake family so they can go there.

In their condo, Stan Sitwell is recovering in bed but his doctor said he has trouble tracking time. It's only been a day since the parade accident, but Maeby lies to him that it's been months. She also lies that she didn't hit him on the head, that his two kidnappers did. Stan tries to rekindle their relationship, but she says "it's over" and leaves to answer the doorbell. Tobias and family are disguised as Mrs. Featherbottom, Bev, and Mrs. Gene Bettywhite.

At the beach cottage, George asks if he can stay for dinner with Lucille so they can rehearse for when they meet the Chinese investors tomorrow. Lucille claims that Dustin Radler is an expert on the Far East, and he comes downstairs. George met him previously on the beach while he had the Zorb ball. Dusty says he surfed in Vietnam on two group tours, and he says these "Asia-y" cultures are all interested in honor. Your opponent needs to save face. Dusty goes upstairs, and Michael arrives to confront his parents about the border wall printout. They say that they need to build a prototype wall to stall the Chinese investors until after the 2016 presidential election. They assume that Hillary will win, and she won't want a border wall. Michael refuses to sell Sudden Valley and he says his parents should be honest with the Chinese about losing the money.

Meanwhile Buster and Oscar move into the model home attic, with Oscar still deceiving his son. They recently found a getaway truck and lost Buster's new hand. Buster noticed the Welcome Home banner, though, and is getting suspicious. Oscar convinces him it's a joke, and Buster plans to be the Inside Outside Bandits for a couple of months and possibly never leave. Buster goes downstairs for food and hides in the kitchen when he hears Gob arrive.

Gob saw Buster's truck outside and drags the body bag inside. He sits with Buster on the floor and asks him to get rid of the body as a sort of magic trick. Buster says he can't help because he's on the lam, but Gob explains that he was released from jail and is not a wanted fugitive. Buster doesn't want go back to living with George Sr, and wants to pretend to Oscar that they're still on the run. Gob promises to keep his secret safe if Buster will help him with the body bag. He's still bound by the magician's assistant oath, so Buster agrees.

On the next AD, Gob goes to the Christian conversion clinic, and Mrs. Veal has him sign some paperwork. He's attracted to her and leaves so that the therapy won't work on him. Buster and Oscar drive around town looking for a place to have dinner. Their getaway truck is the staircar, and Buster uses the stairs to dump the body bag over a cliff into the sea.

Retrieved from "https://arresteddevelopment.fandom.com/wiki/Chain_Migration?oldid=54720"
Community content is available under CC-BY-SA unless otherwise noted.