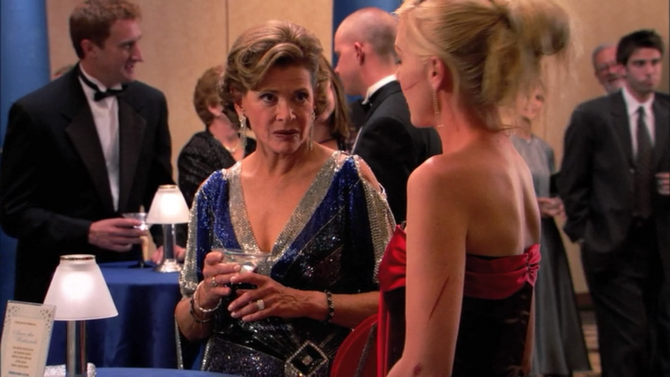 Michael and Lindsay try to prove their charitable sides to each other. G.O.B. demands George Michael's respect, and Buster continues avoiding Lucille 2.

During a heat wave, Michael discovers that his siblings have been hiding his father's Mercedes from him. Lindsay chastises him for not doing anything charitable so he picks up a woman, Helen, whom he thinks is his mother's new housekeeper Lupe. Lindsay, who has conversely been chastised by Michael decides to volunteer to clean up the wetlands. She finds herself horribly out of her comfort zone and calls Michael to pick her up. She finds her cab but forgets to call Michael, who shows up with Helen. Helen flees and Michael goes to the Save the Wetlands Bachelorette Auction to support his mother. He sees that Lindsay, sunburnt and in ill-shape, did try to be charitable and saves her from humiliation by bidding $1,000 on her.

When Michael finds that G.O.B. has been hiding the family car and taking free frozen bananas from the Banana Stand he tells him off in front of George Michael. When Kitty tells Michael that George never filed some building permits, George tells Michael to have G.O.B. break into the Permit Office to misfile them. Michael asks his brother, who demands Michael tell George Michael to respect his uncle. He also gives up animation rights for his newly invented Mr. Bananagrabber character. After chipping a tooth on a carmel apple, he whistles when he speaks and blows his cover at the permit office. He delegates the task to George Michael and Maeby. They are caught by security guards but George Michael lets Maeby escape so he can take the heat.

Lucille prepares for the Save the Wetlands Bachelorette Auction and instructs Buster to bid $10,000 on her so she can show-up her social rival Lucille Austero. Lucille 2 has been waiting for Buster to make a romantic gesture toward her, but he is terrified of her so he has been hiding. Lucille tries to lure Lucille 2 away from the auction with The Producers tickets but when Buster refuses to call her back she decides to go to the auction. Buster, running late, runs into the auction when he hears the word "Lucille" and bids $10,000 on the wrong Lucille.

Retrieved from "https://arresteddevelopment.fandom.com/wiki/Charity_Drive?oldid=54798"
Community content is available under CC-BY-SA unless otherwise noted.