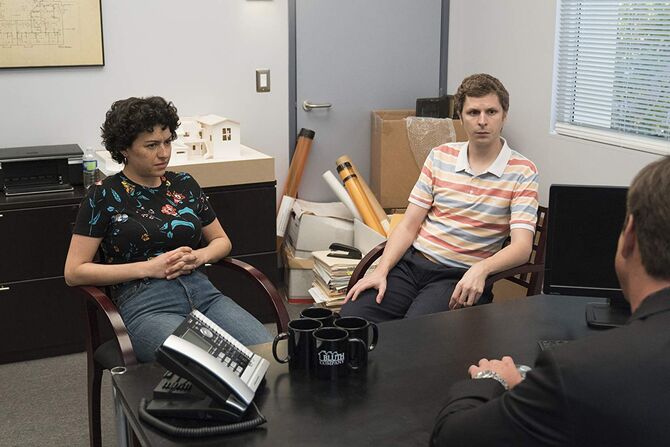 Oscar drives the staircar to the police station and confesses to Buster that he's not a fugitive. Buster admits that knew the truth but wanted to spend more time with his father. Oscar says Buster should go inside and sign out, then they can continue their adventures. Buster agrees, but he gives Oscar an ultimatum that he must give up marijuana. While he's gone, Oscar runs away.

George and Lucille have dinner with the Chinese investors and lie that Sally Sitwell is against the wall. However, they know it's a lie because she gave a public endorsement. Eventually George confesses the truth, as Michael told them to do, and the investors offer them $3 million to save face and remove shame. They wire it into a bank account for the Bluths.

Michael visits George Michael on the third floor Fakeblock office. Maeby tells Michael that Gob is the new president, and George Maharis is now the Chief Technical Officer. Michael visits George Michael in his office and gives him a present, his first paycheck, framed. Reminded of "there's always money in the banana stand," Michael notices that the check is from a Cayman Islands account at Grand Harbour Bank. He takes the check back from George Michael, so he can investigate the secret money.

Dusty shows up at the restaurant after the Bluths got $3 million, and he explains that they will have to give the money back to save face. If they don't return the money, the investors will be "mildly displeased" and get revenge on them. Lucille leaves with Dusty to get ice cream.

Meanwhile, Maeby is fed up with Tobias's fake family taking over the condo. She tells them they can't stay, because Stan is already getting suspicious of her as Annette. Then Stan walks in, assumes the others are her family, and asks if she wants him to leave because of them. She says yes, and he leaves to pack. The others all hug Maeby.

Upstairs at the Bluth Company, Michael meets with George and Lucille to confront them about the money he discovered. George Michael and Maeby interrupt to share their news. Then Michael reveals that he bought Fakeblock using a shell company called B.S. Enterprises; originally the initials stood for "banana stand" but Michael changed it to "Bluth and Son." George Michael gets upset, while George and Lucille ask Michael where he got the money from. He found their "banana stand slush fund." They tell him that the $3 million in that account was from the Chinese investors and they need to give it back. Michael refuses, and says that George Michael already spent it on his employees. Under pressure from his dad, George Michael lies that Fakeblock is real and everything's fine.

Gob suddenly appears in the elevator, dancing, and announces his new assistant Buster, whom he found at the police station last night. Buster gets his fake hand caught in the elevator door, but comes back from the stairs. Lucille blames Buster for wanting to be in the July 2nd parade. Then two cops arrive in the elevator. Gob was expecting Hot Cops, whom he called earlier to prove he was still gay. But these are real cops, and they arrest Buster because they found the staircar outside the police station last night. Buster doesn't know he's really being arrested, and neither does Gob, so they continue dancing as the cops take Buster away in the elevator.

On the next AD, Gob continues singing and dancing, long after the other Bluths realize Buster was arrested.

Retrieved from "https://arresteddevelopment.fandom.com/wiki/Check_Mates?oldid=54721"
Community content is available under CC-BY-SA unless otherwise noted.