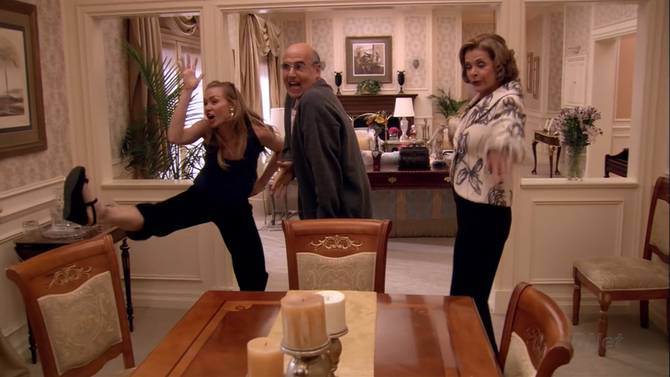 Each member of the Bluth family has a different form of a Chicken Dance that they use to mock other people, usually members of their family. The origin of the family's habit is unknown, but nearly every member (except Buster and Maeby) have their own interpretations, which as Michael and Buster point out often are nothing like chickens or even any birds.

G.O.B. is the Bluth who most frequently performs his chicken dance. It is first seen in "Staff Infection" when he challenges Buster's opinion to work on the construction site unpaid. Buster's response is that chicken's don't clap. The two sort their issue out via a game of Bulldozer chicken (a la Footloose). They tie, but G.O.B. learns to respect Buster. ("Staff Infection")

G.O.B. performs his chicken dance in Mexico when a child asks him if he would like a Chicklet, much to the chagrin of Michael because his dancing attracts Mexican homosexuals (as seen in old black and white films). He later performs the dance and is tackled by Gene Parmesan. ("¡Amigos!")

G.O.B. later injures his leg when performing the chicken dance to mock Buster, so he is unable to perform it again when mocking Michael for being too afraid to pursue Sally Sitwell. ("Burning Love")

Lindsay performs her chicken dance while mocking Michael for not asking Sally to attend a romantic getaway he bid on at a bachelorette auction. G.O.B. joins her. ("Ready, Aim, Marry Me") Lindsay mocks her brother by doing the chicken dance, and is joined by her family. ("For British Eyes Only")

Lucille drunkenly performs her chicken dance at the Bluth Company offices when Cal Cullen tells her that he is afraid to end up on Scandalmakers if he spends more time with the Bluths. ("Spring Breakout") She then performs it with the rest of the family as they mock Michael. ("For British Eyes Only")

George performs his chicken dance when Michael tells him about Rita. George insults Michael, telling him that he's always been too chicken to talk to women or seal the deal. As he dances, Lucille and Lindsay join in but G.O.B. is too late and misses the event. ("For British Eyes Only")

Although he doesn't dance, Michael performs his chicken impersonation over the phone to Lindsay while driving the stair car from Wee Britain. He nearly gets in a car crash with Uncle Trevor, causing him to scream. Lindsay took his screams for a decent chicken impersonation. ("For British Eyes Only")

Tobias briefly impersonates a chicken during his participation in G.O.B.'s Free Chicken Illusion. The blood on his head from he recent hairplugs disturb the audience. ("For British Eyes Only")

George Michael: Block block...
From "It Gets Better"

When P-Hound suggests "Block Block" as the name for their software, George Michael says it sounds like a chicken. When P-Hound doesn't understand, George Michael attempts to explain by showing his version of the chicken dance (according to him, his dance is hard to do in matador pants), but gets interrupted.

In a flashback, Michael remembers his last conversation with Lucille 2 from Cinco de Cuatro, which ended when he did a chicken dance in front of her and fell down the stair car. 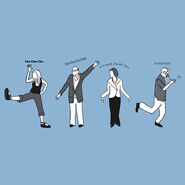 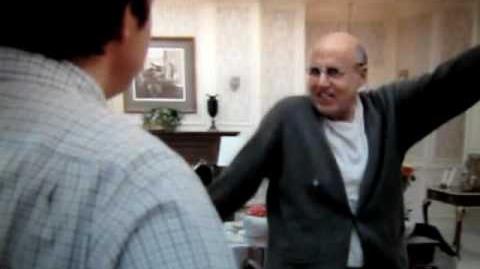 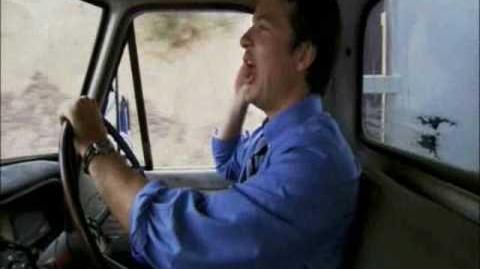 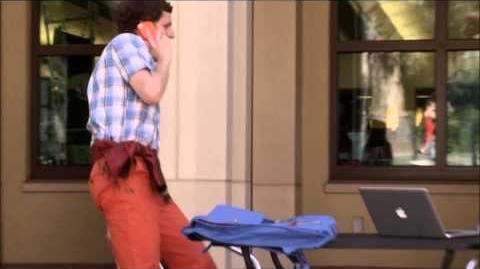