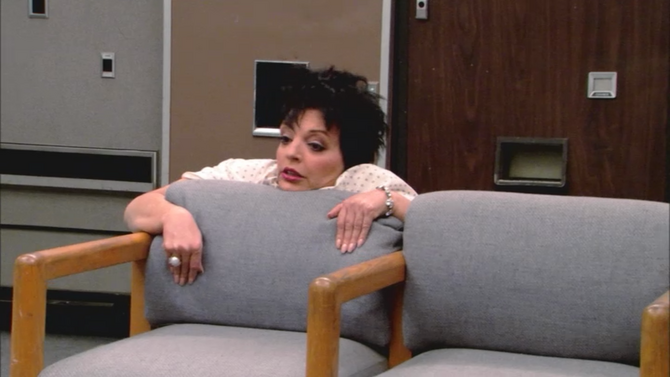 Lucille Austero suffers from chronic vertigo, a medical condition which can makes standing or flying in aircraft difficult. She calls them "the dizzies".

Lucille Austero is trying to fight her chronic vertigo without the use of medication. Her condition is introduced in the same episode she is, "Key Decisions". She has a vertigo fit at the hospital while flirting with Buster.

Lucille Bluth attempts to lure Lucille 2 away from the Save the Wetlands Bachelorette Auction with tickets to The Producers and comments: "I already saw it in New York. But that’s of no use to a woman whose vertigo makes flying a grotesque misadventure." ("Charity Drive")

Lucille 2 later attributes her lower frequency of fits to her relationship with Buster. ("My Mother, the Car") However, they flare up again and Buster refers to the vertigo as "our vertigo". He also tries to get George Michael to buy her marijuana to help her deal. ("Pier Pressure")

Lucille eventually undergoes some treatment at the Plumb Clinic which cures her, but a ride in Michael's Corvette throws her off balance again. ("Queen for a Day")

Retrieved from "https://arresteddevelopment.fandom.com/wiki/Chronic_vertigo?oldid=32262"
Community content is available under CC-BY-SA unless otherwise noted.