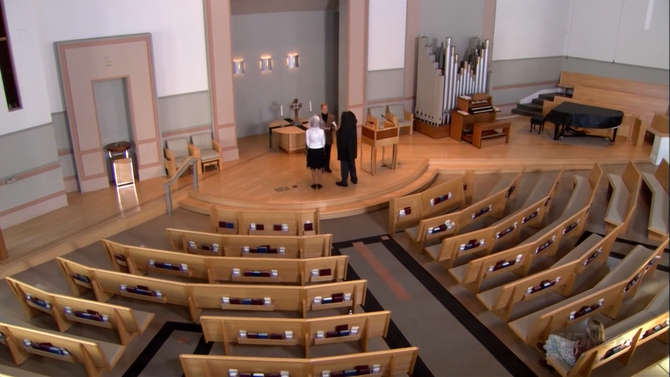 Church of the Good Shepherd is a Newport Beach church where Terry Veal is a pastor.

Lupe hired the church's bus to transport her family to the ferry for her family reunion on Catalina island. The Bluth Company employees got on it, assuming Lindsay had arranged for it to take them to lunch. ("Staff Infection")

Ann and George Michael were talking about pamphlets from the church when they were interrupted by Michael. Lindsay "cleaned" the room by putting everything in trashbags in the attic, including the pamphlet. George found the pamphlet and temporarily converted to Christianity. ("The Immaculate Election")

George and Lucille renew their vows at this church but the ceremony is interrupted by Oscar when he attempts to win Lucille's heart. Terry Veal officiates, and fights Michael when he hears that Mrs. Veal kissed Michael. ("Meat the Veals")

Retrieved from "https://arresteddevelopment.fandom.com/wiki/Church_of_the_Good_Shepherd?oldid=46883"
Community content is available under CC-BY-SA unless otherwise noted.