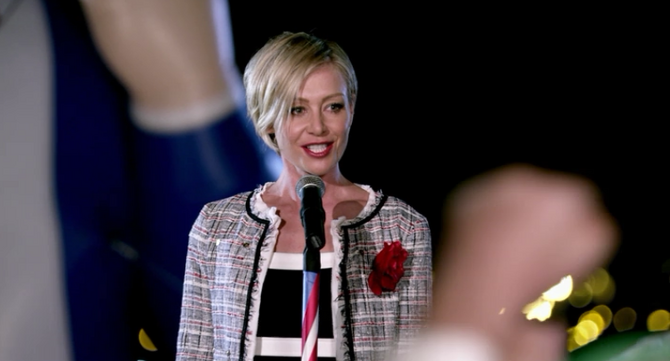 "Cinco de Cuatro I" was the twentieth episode of chronological re-cut of Arrested Development's fourth season. It premiered on Netflix on May 4, 2018.

After each has a bad experience with Love, Buster seeks out Lucille 2 and Lindsay realizes who she really is. Maeby learns the truth about Perfecto.

At the Love household, Buster is fitting in and thanks Ophelia Love for all her help. He wants to take their relationship to the next level, meaning she should adopt him, however Ophelia kisses him. She has found out that Herbert Love has cheated on her with a prostitute, actually an unaware Lindsay. Buster decides to be Ophelia's lover and not her son, and they sleep together. Meanwhile, Lindsay bumps into Marky Bark, who is now out of prison. He is planning to plant a bomb on Herbert Love's float at Cinco de Cuatro before fleeing to Mexico to be with his mom.

The next day, Buster visits Lucille and tells her that he no longer needs her because he has Ophelia. While leaving, Buster meets Michael and gives his signature for the movie. Afterwards, Buster returns to Ophelia but she has talked to Herbert and they decided to give each other another chance. She tells Buster that she was just using him to hurt her husband and that he should leave. Buster grabs the photos of Herbert with the prostitute before accidentally knocking himself out with his giant hand in the hallway.

At the Fantastic Four rehearsals, Lucille has begun to perform as the villain of the show while also insulting DeBrie's performance and appearance. On the night of Cinco de Cuatro, they arrive at the pier and Tobias must put on his "rock monster" costume before handing out fliers. He runs into a problem, however, when he discovers how many children are there and he must tell him that he is a (wrongly accused) registered sex offender.

Elsewhere at the celebrations, Lindsay finds Herbert and, before she can warn him about Marky's bomb, he pays her for the sex they had. Lindsay is offended that he thinks that she is a prostitute but she cannot throw the money back at him. When she meets Maeby, Lindsay apologies for taking her check and hands her the money. Maeby is mainly offended that Lindsay paid directly rather than the money going to her. Maeby meets Perfecto and asks him to deal with Herbert Love for her.

Buster, while looking for Lucille 2, sees Tobias and Tobias asks him to dress as The Thing for the Fantastic Four musical because he can't perform it, because of all the children. He gives the costume to Buster and tells him he's a monster although Buster only wants to give the Herbert Love photos to Lucille 2. Tobias leaves and Perfecto then talks to Buster, asking him to deal with Herbert. Perfecto and Buster met through an anti-bullying scheme at his school, while Buster was looking after the Love family's children. Buster tells him that he can't be a monster and leaves to met Lucille 2. She recognises Lindsay in the photos with Herbert Love and Buster wants her to ruin Herbert's election chances.

Lucille meets Lindsay and she also knows about the photos. Lindsay tells her that she is recommitting to being liberal and she throws away her red wig disguise. Lucille tells her that she is always going to be a Bluth who only cares about herself. Lindsay decides to accept Lucille 2's offer to be a campaign manager but Sally Sitwell has already taken the role. Sally tells her that Lucille 2 is going to make the photos with Lindsay go viral in order to take down Herbert Love. Lindsay leaves and immediately bumps into David, Herbert's aide. Herbert has disappeared and someone needs to talk in his place. Lindsay decides to talk to his very supportive crowd so she can accuse him of sexual harassment before the photos become public knowledge.

Perfecto returns to Maeby and tells her that Herbert has been taken care of. The blowback at Cinco starts and Maeby mentions that he is an undercover cop but Perfecto reveals that the badge was actually an anti-bullying badge. He is actually 17 and Maeby grows concerned because of their relationship and the fact that she is 23. Perfecto tells her not to worry because no one knows about that except, it turns out, Perfecto's adoptive mother Lucille 2.

Back on stage, the blowback reaches Lindsay and one of the protesters steals her necklace. She believes that they're Mexicans and feels that they should put up a wall. The crowd loves this idea and so Lindsay continues to chant it along with them.

On the next Arrested Development: Fateful Consequences... Sally Sitwell is on TV talking about the disappearance of Lucille 2 next to the bloodstained steps of the stair car. Sally hopes that she is found while a man paints "VOTE FOR SITWELL" on the side of the stair car. Meanwhile, Maeby is back at high school and her teacher overhears a conversation between her and Perfecto where she mentions that they slept together. Her teacher is actually Rocky Richter, not Donnie, and he arrests her because he is an undercover cop.