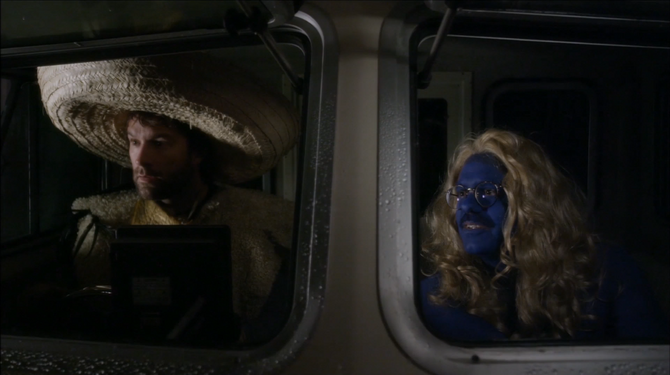 "Cinco de Cuatro II" was the twenty first episode of chronological re-cut of Arrested Development's fourth season. It premiered on Netflix on May 4, 2018.

Walls are the center of attention as the Cinco de Cuatro celebration get underway and Tobias unknowingly becomes an active participant in two bombs.

At the Cinco de Cuatro celebrations, George Sr. runs into Michael, who must pay back his debt to Lucille 2. George Sr. wants to know if Michael convinced Herbert Love to oppose the border wall although he doesn't want Lucille 2 to know about the wall. Lucille 2 overhears and is furious, especially because George Sr. gave money to Herbert Love's campaign. She wants to make sure that Herbert says that he is against the wall in his speech or she'll talk about it in her speech.

Meanwhile, Tobias tries to calm down DeBrie by telling her that she must be perfect. However, Tobias finds out he won't be able to perform as The Thing because he will be too near children, which isn't allowed since he has been (incorrectly) registered as a sex offender. He gives costume to Buster who then talks to Lucille 2. Buster gives her the photos of Herbert Love and Lindsay before telling her about his separation from his mother. Lucille 2 tells him that she is the reason he missed Lucille's trial, which led to their falling out, because she served Buster regular sugary juice instead of the healthier juice that she offered. Buster is furious with her and Lucille 2 also tells him that she's been dating his father for a couple of weeks.

Elsewhere, Dr. Norman is throwing his drugs into the water when George Sr. visits him to find out his test results. Dr. Norman tells him that he has almost no testosterone but, on the other hand, his estrogen levels are much higher. Later, DeBrie finds the drugs in the water and takes them because of her nerves. Tobias finds her laying in the trash and Lucille 2 tells him that she will most likely fire him. On her request, Tobias moves DeBrie by putting her in a chair and placing a Fantastic Four advert on top of her.

Lucille finds George Sr. in the crowds, ready to escape on the boat together. However, George knows nothing of this plan as she told Oscar, who had pretending to be George. Oscar was initially asked to visit Lucille once by George but when Oscar found out about the border wall plan, he decided to get revenge on his brother by sleeping with Lucille. She is angry and declares that they are going to divorce. George Sr. then runs into G.O.B. who wants money to pay the Mongolians who have started build the border wall. George tells him that they have no money and leaves G.O.B. to tell the workers this.

DeBrie, barely conscious, is quizzed by a lawyer who hands her a cease and desist letter for the Fantastic Four musical. Tobias finds the letter but decides that the show must go on so he takes DeBrie's Sue Storm. Meanwhile, Oscar meets Lucille, apologies for his deception, and tells him that he has a boat waiting for their escape. Lucille is touched until she discovers the Lucille 2 sticker on Oscar's backside, a result from his affair with Lucille 2. Lucille tells him to leave and meets Tobias, who asks him to play the Invisible Girl, not the villian. Lucille misunderstands and thinks he is giving advice as a therapist. She decides to go back to rehab. Out of desparation, Tobias decides that he must play Sue Storm by using the wig and his blue body paint.

At the Donkey Punch stand, Buster drinks the juice which is sold by a disguised Gene Parmesan. Buster sees Herbert and is so angry that he knocks him out with his giant hand. Since Herbert cannot give his speech, Lindsay gives the speech even after one of the Mongolians, who G.O.B. couldn't pay, runs on stage and tears off her necklace. Lindsay supports the wall and George Sr. decides that he must escape, which he does by taking the red wig that she threw away.

Tobias makes his way to the floating stage but accidentally gets onto a boat with Marky Bark instead. Marky tells him about the bomb that he planted in a suitcase on the Herbert Love raft. They both realise that Lindsay is on the raft and try to warn her. However, because Lindsay and Tobias have matching suitcases, the suitcase on the back of their boat explodes instead. Meanwhile, Buster sees the body of Lucille 2 on the stair car steps, before it disappears five minutes later. Buster sees the security cameras and realises that he will be in Michael's movie.

On the next Arrested Development: Fateful Consequences... George lives as a woman and refuses to answer the police officer's questions about Lucille 2's disappearance, claiming his husband isn't present. Buster visits George Michael to use his Fakeblock software to remove the security camera footage of him and Lucille 2's body.

This episode is made up from 9 episodes of the original cut of Season 4. Because the re-cut is chronological and combines the characters' stories into one narrative, new narration was recorded and there is even some additonal dialogue. These changes, as well as which scenes appear in which original episode, are listed below:

Retrieved from "https://arresteddevelopment.fandom.com/wiki/Cinco_de_Cuatro_II?oldid=54761"
Community content is available under CC-BY-SA unless otherwise noted.