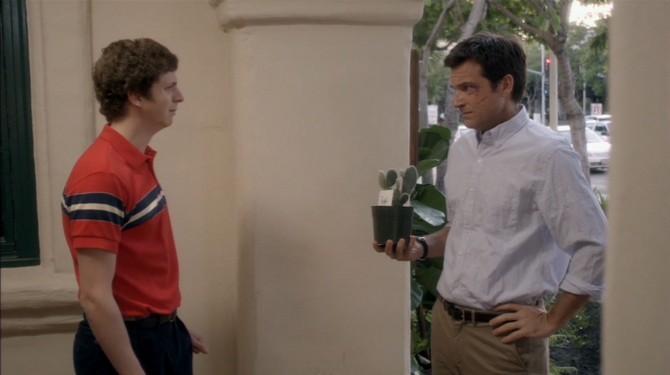 "Cinco de Cuatro III" was the twenty second episode of chronological re-cut of Arrested Development's fourth season. It premiered on Netflix on May 4, 2018.

George Michael tries to make amends with his father but things get weird. G.O.B. gets shocking news when he runs into Ann at Cinco de Cuatro.

Michael decides that he must deal with G.O.B. in Sudden Valley but bumps into George Michael there instead. Michael is surprised that he bought a house there and George Michael apologies for kicking Michael out of his dorm. George Michael also says that he wants to impress his girlfriend with his house but it didn't work out. Michael is secretly pleased about this because he is also dating Rebel Alley but then he reveals that he thinks his relationship and his job as a producer might be over too.

At the Cinco de Cuatro celebrations, George Sr. tells Michael that Lucille 2 shouldn't know about the wall and Michael realises that he must sleep with Lucille 2 in order to help repay his $700,000 debt. Meanwhile, George Michael is unsure whether he should tell the truth at the Fakeblock speech when he runs into G.O.B., who he asks for advice. G.O.B. advises that he lie so he can stay with Rebel and George Michael decides that it's best to do the opposite of what G.O.B. says.

Ann Veal is also at Cinco with her five-year-old child. She reveals that his father is Tony Wonder and G.O.B. feels betrayed so he asks Ann to spend the night with him, as revenge. They leave while Michael tries to seduce Lucille 2. She rejects him but Michael is desperate for his deadline to be extended and says he can't be held responsible for what happens if he doesn't get it.

The blowback begins and the chants of "put up this wall" inspire George Michael to lie about Fakeblock in his speech. He also receives a note which he believes is from Rebel and it reads "You are about to get screwed like you've never been screwed before - Anonymous". In fact, the note was from hacktivist group Anonymous.

At the model home, Ann is ready to sleep with G.O.B. but he reveals that she is actually going to sleep with Tony as part of a revenge plan. He wants her to wear a mask of his own face and then tear it off so the cameras from To Entrap a Local Predator see that Tony isn't gay, ruining his magic career. Ann doesn't want to sleep with Tony and G.O.B. says he will wear a Tony Wonder mask instead so the plan still works. Ann leaves the room just as Tony arrives at the model home. She tells him that G.O.B. is trying to get revenge on him and he seems genuinely shocked. She suggests that they can sleep together while she wears the Tony mask and he wears the G.O.B. mask, in order to ruin G.O.B.'s career as a Christian magician. Tony agrees and, in the meantime, Ann leaves while a masked Tony goes into the bedroom with a masked G.O.B.

The next morning, G.O.B. goes downstairs to take a Forget-Me-Now and finds Michael in the living room. Michael tells G.O.B. that he has done something unthinkable and, when G.O.B. offers to split his last Forget-Me-Now with him, Michael says that he must remember what he has done. However, when Michael sees Tony in G.O.B's dressing gown, G.O.B. forces him to take the pill and Michael passes out.

When Michael wakes up, he rings Lucille 2 promising to repay her. Afterwards, he rings Rebel to tell her that he doesn't care about the other guy and that he will come over later. George Michael, who is currently at Rebel's apartment, tells her that he wants to get serious with her and Rebel agrees. As George Michael leaves, he meets into Michael, who is on the way to meet Rebel. George Michael realises that they are both dating Rebel Alley and Michael pretends that he doesn't know. However, when he mentions that they both went to the photo booth, George Michael figures out that Michael must have known about the relationships before now and he punches his father in the face.

On the next Arrested Development... Buster is arrested for the murder of Lucille 2. Ron Howard and Brian Grazer celebrate that they have the rights to his story. On the news, John Beard reminds us to "love each other".

This episode is made up from 11 episodes of the original cut of Season 4. Because the re-cut is chronological and combines the characters' stories into one narrative, new narration was recorded and there is even some additonal dialogue. These changes, as well as which scenes appear in which original episode, are listed below:

During the Season 4 remix, the narrator often draws parallels between the Bluths' lives being similar despite being separated.

Retrieved from "https://arresteddevelopment.fandom.com/wiki/Cinco_de_Cuatro_III?oldid=54762"
Community content is available under CC-BY-SA unless otherwise noted.