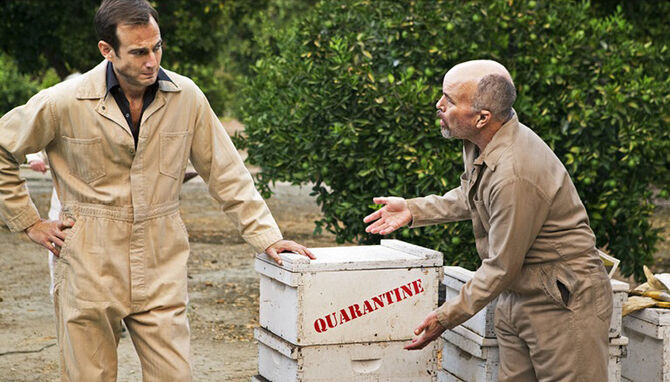 G.O.B. finds a new group of friends after his relationship falls apart and his family abandons him.

After being punched by George Michael for dating Ann, G.O.B. ran away then spoke with Ann about the future of their relationship and his hopeful magic career. After his father's exoneration party and his mother was arrested G.O.B. spoke with Jackson about the animals he had on his person that drowned when Lucille stole the RMS Queen Mary. George Michael refused to give him his approval to see Ann but G.O.B. accepted his hypothetical "Yes" as a real "yes". He then realized the relationship meant nothing to him so he snuck into Ann's room to break up with her. She unzipped her pajamas and G.O.B. was reminded of similar times that made him aroused so he slept with her. While attempting to break up with her during post-coital eggs, Ann told him she wanted him to have space. Taken aback by this, he joked "Marry me!" which she took literally. She and the rest of the Veal family celebrated in a giant group hug.

G.O.B. and Ann announced their wedding to the Bluth family at Balboa Towers and received no attention from the family. G.O.B. then announced that he was going to perform a wedding illusion on And As It Is Such, So Also As Such Is It Unto You. He asked Michael to be his Best Man and illusion assistant but Michael refused. G.O.B. also confessed that his bee business was going poor due to his sick bees. Instead, Tobias acted as Centurion #2 during the Jesus' crucifixion illusion. The crowd was taken aback by the blasphemous performance and G.O.B. was unable to unlock his handcuffs so couldn't break his fall into a secret compartment. He was knocked unconscious and was carted into a storage locker. G.O.B. survived in the storage locker for two weeks on nothing but red licorice vines until found by the filming of Locker Hawkers: Something Smells Terrible Edition.

In the hospital Ann dumped G.O.B. and gave him a Biblical pamphlet. G.O.B. took the pamphlet's advice and tried to be a better man by reuniting with his son Steve Holt at the And Jeremy Piven club. G.O.B. talked with Steve for over an hour before he realized that the now balding man was his son. Steve then offered him a job at his Steve Holt! Pest Control business. Once Steve left, G.O.B. performed a cherry illusion which John Beard Jr. noticed and asked him to perform for teen pop icon Mark Cherry. He continued to impress the group with magic until some paparazzi arrived. G.O.B. squirted lighter fluid in the paparazzi's eyes so the crew could get away, earning him the nickname "Getaway".

G.O.B. partied with the group for several months but was usually just their limo driver. He partied with some girls and caught syphilis and tried to take Forget-Me-Nows to forget but got caught in a roofie circle and ended up in a Mexican hospital with stage 4 syphilis. Mark Cherry and the gang grew so tired of him they tried to get rid of him by writing the song "Getaway" but the message didn't get through.

G.O.B. picked up his sick bees from Johnny Bark and put them in the trunk so Mark and the entourage could fit in the limo. After picking up some party girls from And Jeremy Piven, including DeBrie Bardeaux, DeBrie opened the compartment to the trunk and the bees swarmed the cabin of the limo. The entourage and girls were admitted to the hospital and then to rehab but G.O.B. wasn't made aware until he went to The Opie Awards where he tried and failed to sabotage a Tony Wonder magic act. He then went down to Mexico to help his father with the wall project at his sweat lodge and the bees swarmed the guests. G.O.B. noticed his cave, sold by Ann to Heartfire on Craigslist. He found a cross necklace wedged into the crack of the secret door and thought the "t" stood for Tony Wonder.

In the chronological re-cut of season 4, footage from Colony Collapse is used in 11 different episodes. The original cut of Season 4 is slightly longer than the re-cut version. Because of this, various lines of dialogue and sometimes even scenes are cut. These changes, as well as which scenes appear in which remixed episode, are listed below:

G.O.B.: Two drowned white doves from "Flowers to Doves," a rabbit from "Doves to Rabbit," also drowned. These were mice...

Tobias: From "Rabbit to Mice?"

Tobias: How'd he do dat?

Michael: Hey mouth, I didn't see you sitting there.

Ann: We rode up in the elevator together.

G.O.B.: Yeah, me and blank are getting to the old Christian magic act again.

Father Marsala: [to Ann] I thought you were hair.

Michael: I started my own company - The Michael B. Company.

Michael: No. I did not steal your- we sell hou- it would take hours. How's that going by the way?

G.O.B.: Uh, not so good. I've been keeping the bees in my apartment. I was using my magic smoke on them and my bees were dropping like flies and I need them to fly like bees so I've got them out at a bee hospital which is not cheap, which is another reason I need to be a famous magician..." 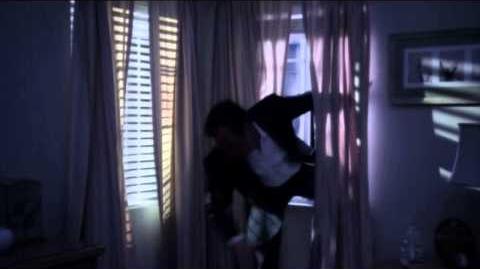