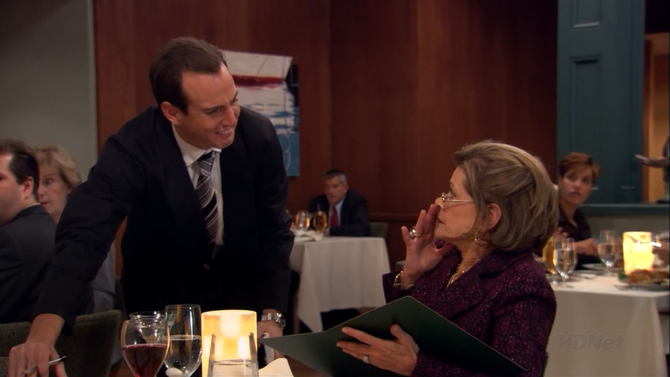 "Come on!" is a phrase commonly said by G.O.B. when he is frustrated. The two words "come on" are said often by many characters in the series Arrested Development but the following instances are notable as they have the same frantic intonation.

Michael: Do you have your check for your share of the party?

G.O.B.: You know, I sort of thought my contribution could be a magic show.

Michael: Or, wait a minute. I just remembered something—Dad’s retiring, not turning six.

G.O.B.: Hey, come on, I just bought this new illusion called The Aztec Tomb. It cost, like, eighteen grand.

Michael: Oh, G.O.B.! I just wanted you to get the information.

G.O.B.: I got the information.

Michael: You did, huh? About the international accounts?

Narrator: In fact, G.O.B. had started to alienate some of his colleagues.

G.O.B.: Come on! They like me just fine. You’ll see that tonight when they toast me at the Christmas party. Just like they used to with Dad.

Narrator: Michael and Maeby stopped by the office to see if G.O.B. needed help for the party that was now hours away.

Michael: There are no others. You fired everyone.

G.O.B.: Oh, that’s... that’s-that’s great. The guy who’s dirty dancing with his niece is going to tell the guy in the thirty-six hundred dollar suit how to run the business. Come on.

Lucille: That hairless freak is coming here? None of his hair is real, you know.

G.O.B.:' You mean the guy we’re meeting with can’t even grow his own hair? Come on!

Michael: What are you doing?

Lindsay: That’s what I was just telling him. Cha! Cha!

Michael: Look, I haven’t found the right girl. When I do, I will ask her out. Has anyone in this family ever even seen a chicken?

Narrator: Lucille, meanwhile, was there soliciting for the fundraiser, but still hadn’t noticed [G.O.B.]...

Lucille: We’ll have the lobster tail.

Narrator: ...until this happened.

G.O.B.: And maybe later you can save a little piece of tail for me.

Michael: CIA. Of course. This explains why it was so easy to get you out of prison.

Richard Shaw: I knew that if he got out he would lead us right to whatever your dad was hiding.

Narrator: They’d even created opportunities for this to happen.

Prison Guard: Get in the cell, stupid.

G.O.B.: Yeah, you guys can run this place without us. As soon as you stop dropping your keys. Come on!

Narrator: They’d even staged something called an honor marathon they thought he was sure to take advantage of.

George Michael: Sure, I may want to, you know, now. I-It doesn’t matter. Either way, I won’t do anything about it. Come on!

Narrator: And then his first.

G.O.B. mutters "come on" when Ann asks him how he's doing after they sleep together in "Colony Collapse".

Tony Wonder:There's only one problem with your plan: I don't have a trapdoor in here.

From "Premature Independence"
Retrieved from "https://arresteddevelopment.fandom.com/wiki/Come_on!?oldid=53136"
Community content is available under CC-BY-SA unless otherwise noted.