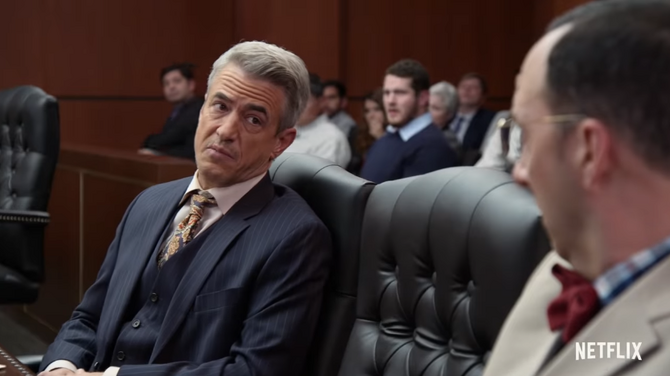 In 1982, young Lindsay rehearses for the talent portion of the family pageant; she sings a Stevie Nicks song and plays harp while wearing a white dress. Meanwhile, Michael is writing their names and talents on a poster. Gob is scheduled to do a "push up dance" while Michael is "Wonder Boy" as a magician. Lindsay's talents include "singing, harp, tap dancing, beauty" and something else. Buster's talent is obscured (but looks like "unleashed"). Lucille comes into the room to criticize Lindsay and kill her confidence; Lucille wants her not to win, so that she can't go on the cruise with Mimi. After Lucille leaves, Gob tells Michael that he really did let Buster off his leash to let him go swim in the ocean. Michael worries that Buster can't swim, so he runs off. Gob looks at the dove that Michael bought for his magic act, and it inspires him to steal Michael's talent for the pageant. He uses "Balls in the Air" for his music and accidentally kills the dove. Then Lindsay tap dances under a sheet due to Lucille's criticisms. Finally Michael returns with Buster from the ocean and resuscitates him on the floor. Lucille declares Michael and Buster the winners of the pageant.

In 2015, Dusty arrives at Buster's trial, still jittery and now upset about his father being in the hospital. When Lottie Dottie sees Dusty, she likes his haircut and is not upset at all. During her opening statement, she shows the video from Cinco of Buster finding Lucille 2's body on the staircar. Lottie points out the timecode, indicating missing footage, which she blames on Buster trying to use Fakeblock to tamper with evidence. She also shows the weather video of Buster tossing the body off the staircar into the ocean. Dusty flips out during his opening argument, but Lottie encourages him maternally.

Lucille confesses to George what she did last night at Dusty's house. She sneaked into a dark bedroom and thought she was having sex with Dusty, but instead she was with Dusty's sick and elderly father. Gob asks if Lottie is Dusty's ex-wife, but Lucille says she's actually his stepmother. In the hallway outside, Lucille confronts Dusty about not being clear about Lottie. Dusty is apparently a motherboy too, trying to make his stepmom jealous of Lucille. After Dusty leaves, Michael asks Lucille what happened, and she clarifies that the Dustin Radler who caused a mistrial was the elderly father, and Barry didn't realize that Lucille was dating Dustin Jr.

Michael suggests that they beg the judge for a mistrial, but Lucille now wants Buster's trial to go ahead while there's still no body found. Later, Dusty interviews Tobias to be a character witness for Buster. Tobias thinks he's going to play Buster as an actor, but Dusty explains that he just needs to testify on the witness stand. Tobias says that on the night of Cinco, Buster was playing the rock monster in the musical that night. Apparently Tobias is no longer at the Spotted Palm and needs a new place to live.

Tobias doesn't show up to the trial, and Lottie calls Gene Parmesan to the witness stand. On Cinco, he says he was working undercover at the Donkey Punch stand. Gene did give Buster some Donkey Punch, but Buster knocked out Herbert Love and left the rock costume behind. Gene took the costume and performed in the musical. Therefore Buster has no alibi.

Tobias and his fake family visit George Michael, telling him that Murphybrown blew their cover at the retirement community, so they got evicted. Maeby also killed off her Annette persona. They all want to move into the office and even offer to do some work, but George Michael doubts they know anything about privacy software. But actually Murphybrown has programming experience and has coded privacy software. George Michael realizes that maybe he can actually create Fakeblock, so he asks to see the software.

Lottie Dottie's next witness is Warden Gentles, who knows a Bluth family secret, which he learned from Lucille. Recently, Lucille met with the Warden to get Buster released for the July 2nd parade, and she got so drunk, she confessed secrets. Gentles had also heard about Imagine Entertainment's streaming series about the Bluths, so he wanted to give that info to Ron Howard, and hopefully screenwrite for him. Ron heard all the secrets and used them in his show "Making of a Monster." Lottie plays a clip from the season finale, and we see that the childhood flashbacks were all episodes of Ron Howard's show. They filmed it when Michael rented out the beach cottage.

In 1982, Lucille Bluth goes upstairs and sees Mimi trying to take Lindsay on the cruise anyway. Lucille makes Lindsay go back into her room, then fights with Mimi in the hallway. Mimi is Lindsay's real mother; she put her three year old up for adoption, then Lucille swooped in before the Sitwells could get her. Mimi says there's some kind of endowment, and Lucille wanted it so she could have a cottage on the beach. Mimi says that Lindsay is about to turn 18 (but she thinks she's turning 14, and is really turning 17, so why are they doing math wrong?) and she wants to take her daughter back. Lucille continues fighting with Mimi, and Buster sees them. He misunderstands their words, thinking that Mimi is trying to steal Buster, not Lindsay, so he angrily pushes Mimi down the stairs.

Warden Gentles says this death is portrayed exactly as Lucille told him, so Lottie says Buster is obviously a murderer and must have killed Lucille Austero in the same way, by pushing her down the stairs. Lucille desperately calls for a mistrial, but Buster thinks she's just complaining again about Buster missing her maritime law trial. Buster yells at Lucille for selling him out to Warden Gentles, and he says she told him that he wouldn't get into trouble.

On the next AD, Murphybrown demonstrates his privacy software to George Michael.

Retrieved from "https://arresteddevelopment.fandom.com/wiki/Courting_Disasters?oldid=54723"
Community content is available under CC-BY-SA unless otherwise noted.